The Problem of Large Format Items

Albums and many other philatelic accessories were originally created for collectors of single stamps and, in many ways, they still are. Large format albums, protection plastics and storage boxes do exist but they tend to be expensive – perhaps because there is not much demand. Over time, large format items get folded, creased and otherwise damaged so that they attract even less interest from collectors.

What, for example, am I supposed to do with the item shown below? It was a bit too big for my scanner but you can see most of it. It’s not valuable but it has some nice features: it’s a Registered banderole, the ODESSA 1 cancellation is a very good strike, the boxed and dated Odessa censor mark in violet – two strikes - is readable (it’s No.237), the franking at 26 kopeks will be fun for someone to convert to weight steps, and so on. The Registration label has been modified in violet ink with the addition of a Cyrillic letter “zhe”.  The trouble is, the whole thing is now very fragile and will separate into two halves unless put into a protective plastic (which I will do).

My guess is that at bottom left, the recipient tore out the address of the sender - maybe the Botanic Garden in Odessa - to keep for reference and some of the other minor damage may have originated in transit. So, in this case,  it’s not all the fault of dealers or collectors. There are no hinges or pencil scribbles. But if I put it out for sale at a stamp exhibition, what do I put on it? Ten euros? Probably less – and for that, you will be getting quite a lot of quite interesting postal history. 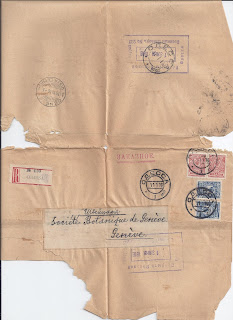