Stamp dealers and stamp speculators often end up with unsaleable stock. Maybe they just bought too big a quantity. What can you do with it? Well, you can try to pass the parcel or you can wait for better times or you can try to add some fresh touch to what you have.

There were large remainder stocks of the Ukraine National Republic fiscal stamps of 1919, especially the two low values of 40 and 50 Shahiv, which were probably bought very cheap in the 1920s and 1930s by a few hopeful dealers. I have many copies in fresh MNH ** condition. I also have many copies of the fantasy overprints added to these stamps in an attempt to make them saleable. For example, the overprints for KHOLM shown below are usually attributed to a tireless fabricator of fantasies, Captain Schramschenko, and are really only of interest if you are making a collection of Capatain Schramschenko fantasies (I’m not). 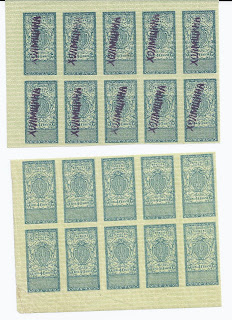 Another story. At one time it was popular to collect picture postcards with a stamp stuck on the picture side and cancelled. The stamps and YOKOHAMA cancels on the front of the two cards below are genuine. What about the backs? I think it’s possible that the Soviet Philatelic Assocaiton imported these cards, but if they did so, the cards would have arrived in one parcel of 100 or 1000 not individually. It’s also possible that the Soviet PA typed its address onto the back of each card, individually – note that in line 4, there is a full stop after per. on one card but not on the other. The SPA did have a Roman alphabet typewriter and the typists did play around with spacing, as someone has done in S O V I E T. 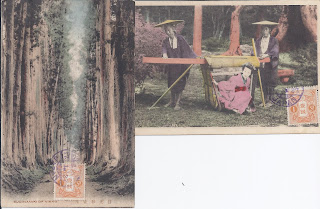 But clearly these Japanese cards were not that popular. Some enhancement was required and someone (and possibly the SPA but it does seem rather crude) thought of Postage Due. We have one genuine Postage Due stamp on the cards and four different cancels / cachets, all looking as if they have never been used before.. I think they are all fake. 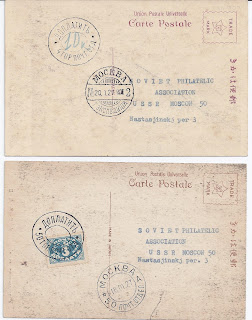 This is perhaps only interesting because it helps me understand a much more significant item in my possession. Below is a genuine cover sent in August 1924 from Ekaterinburg to Moscow, using a system which allowed a letter to be sent unfranked with Postage Due to be paid at the other end. Already in Ekaterinburg a Postage Due cachet has been applied and I think it genuine. I think it also possible that the three stamps belong to the cover but that they were not cancelled at the time, which sometimes happens to Postage Due stamps. This defect has been made good using a forged MOCKBA 19 cancel dated 28 8 24. If the cancels were genuine, then this would have been a very valuable cover since the first Postage Due stamps are extremely rare used. 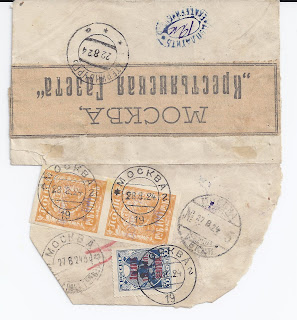