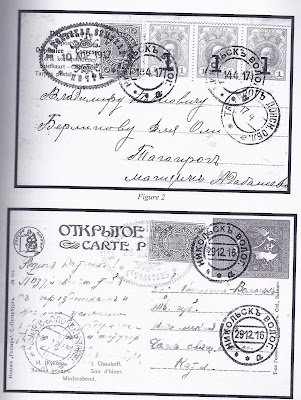 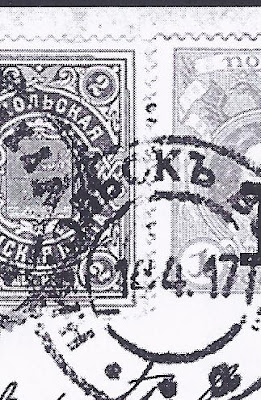 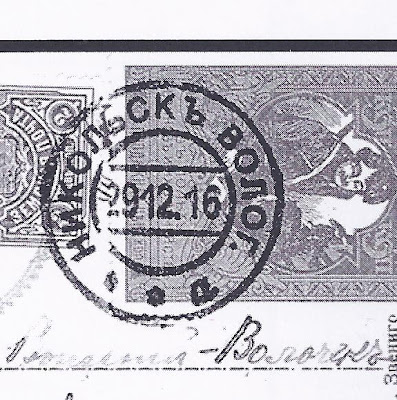 Back on 16 August 2010 I complained about serious collector journals allowing contributors to show off fake material as if it is genuine. Of course, they believe their material is genuine, they just haven't looked at it carefully enough.

I do not have the cards in front of me, so I cannot tell you if the NIKOLSK and NIKOLSK ZEMSTVO postmarks are digital forgeries or made with handstamps. But even in a black and white illustration it is possible to see that the ink of the NIKOLSK postmark is wrong for an Imperial postmark of this period.

The use of large format Currency Stamps and War Charity stamps make it possible for the forger to cover up what was originally on the postcards - the low value Imperial Arms stamp or stamps and associated postmarks. So a thorough forensic analysis of these cards would involve steaming off the stamps to see what is underneath.

Perhaps it is not even necessary. On the second card, look to the left of the "29" of the NIKOLSK VOLOG cancel and you can see what may be part of a postmark obscured by the two stamps. On the top card, look at the gap between the Nikolsk Zemstvo stamp and the first Currency Stamp. There is clearly something underneath...
Posted by trevor pateman at 00:33