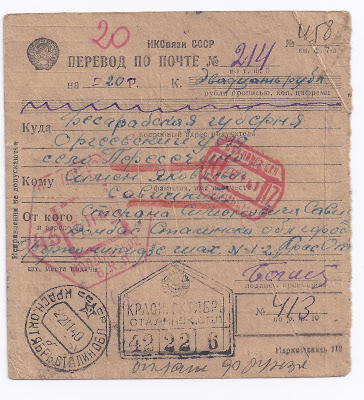 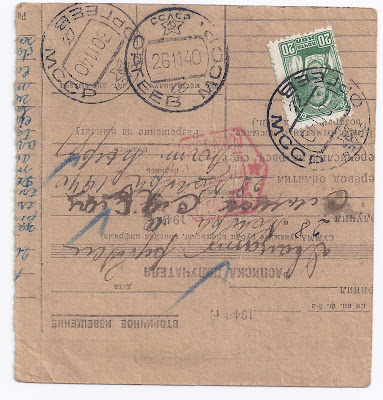 At the end of June 1940, the Romanian government submitted to a Soviet ultimatum and evacuated its civil and military administration from Bessarabia and Northern Bukovina. The Soviet Union then occupied these areas. Areas with a Slavic majority were incorporated into Ukraine and the (southern) remainder became the Moldovan (or Moldavian) Socialist Soviet Republic, a full constituent republic of the USSR.

In this first incarnation the Moldovan SSR lasted a year before German troops occupied it. Mail is relatively uncommon.

Here is a Money Transfer Form for 20 roubles sent from KRASN. OKTYARBR [Red October] in Stalino Oblast on 22 11 40. Received in ORGEEV MCCP on the 26th, it was signed for on the 28th and archived on the 30th after a 20 kopeck stamp was affixed and cancelled.

Curiously, the address on the front begins as follows:

Obviously a post office clerk whose memory went back to Imperial times!

Postscript 6 January: Red October is probably the post office of the Red October factory, famous from the Battle of Stalingrad. Stalino is now Donetsk and before it became Stalino it was Yuzovka, after the Welshman Hughes who played a major role in developing its metallurgical industries
Posted by trevor pateman at 11:04