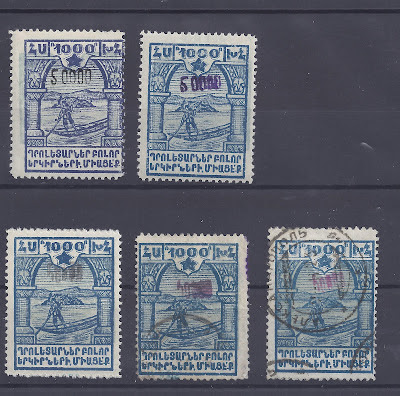 Though the Michel catalogue has a generally good listing for Armenia, it breaks down for the last issue from the 1919 - 1923 period, the Yerevan pictorials listed as IVa to IVk in unoverprinted form and 171 - 180 for the issued, overprinted stamps.

Michel does not give separate listings for stamps overprinted with metal handstamps and those with rubber handstamps, nor does it distinguish overprint colours except in a footnote which values red overprints at a x 10 premium

Above I show the 1000 rouble stamp (Fisherman on Lake Sevan) with a 50 000 rouble metal overprint in black and then in violet (Top Row) and with a rubber handstamp in black, violet and red (Bottom Row). Chronologically, the rubber handstamps came into use first and you do not find mint remainder stocks for them as you do for the later metal handstamps.

In general, metal handstamps are normally found in black, occasionally (on some values) in violet and, to my knowledge, on only one value in red (the 200 000 handstamp). Dr Ceresa lists in his Handbook a Purple-Black and it is true that, quite often, on turning to the back of the stamp which looks black on the front one can see purple (or violet) pigments penetrating. But I am not sure that this variety can always be reliably distinguished.

When I first acquired from Dr Ceresa, about 20 years ago, his stock of Yerevan pictorial overprints, I tabulated the quantities with different colour overprints from the metal handstamps. I came across this listing, working today in my office, and it breaks down a total of 192 stamps as follows

139 stamps with Black overprints (many of these were from Mint remainder stocks)
30 definitely Purple-black (if in doubt, I assigned them to Black)
19 definitely Violet on just 3 of the ten values possible
4 definitely Red on just 1 value (the 200 000 handstamp - this red overprint may have been a philatelic late production)

For the rubber handstamp overprints, there is a different distribution. A total of 140 stamps broke down as follows:

An "advanced" collection will contain spaces where it is uncertain whether a particular value can or cannot be found with a particular colour overprint and in both mint and used condition.
Posted by trevor pateman at 11:26