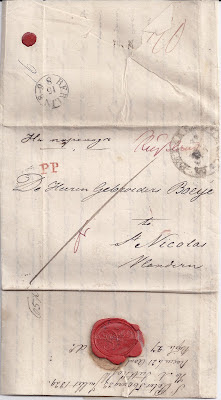 This is a fairly ordinary Russian pre-philatelic entire letter, written (in Dutch or Flemish) in St Petersburg on 23 July 1829. It arrived in St Nicolas, Vlandern (Flanders) on 21 August, having passed through Berlin on the 15th August - see the transit cancellation.

What is interesting is the annotation top left of the front, "Na parokhod" - By Steamship. I wonder if this is an early date for such an annotation, which I have not noticed on other pre-philatelic letters of this period. Does anyone know?
Posted by trevor pateman at 05:44