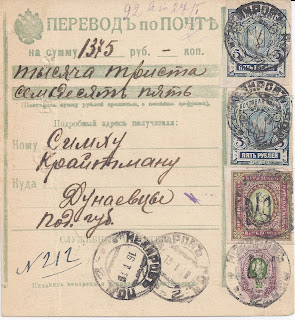 The Transfer Form is correctly franked to 1% of the sum transferred (1 rouble for each 100 roubles or part thereof - so the 1375 is rounded up to 1400, yielding a 14 rouble franking)

But it's still a fairly ordinary Money Transfer EXCEPT that it is franked with stamps from three Trident issuing Districts: at the top the 5 rouble imperforate stamps are overprinted with Kharkiv type II and would have originated in Kharkiv. The 3 rouble 50 imperforate shows Odesa VIb and so was made in Odesa. Only the 50 kopeck perforate has a Podilia overprint (Type Ia) and this would have originated in Zhmerynka (as is true for nearly all the Podilia types: this was shown by Stefan Hawryluk)

So how did these stamps all end up in Nemirov?

There are two main possibilities:

(1) Within Ukrainian National Republic - controlled areas, Districts helped other Districts by supplying them with stamps they needed but did not have locally. A simple Telegraphic request could have triggered a shipment.

(2) As UNR areas fell to Red or White control, some pro-UNR (postal) officials left and took with them whatever supplies of stamps they could carry and these were put back into circulation in UNR areas (of which Podillia was the longest lived). As a minor variant, when UNR-supporting postmasters saw that their local area was about to be taken over by Red or White forces, they bundled up stamps and sent them on any train departing for a UNR area and, once again, the stamps got put back into circulation.

It would be interesting to know what actually happened.

It is relatively easy to find  Money Transfer Forms with stamps in other District combinations - stamps of Odesa are quite commonly seen. And maybe someone has a MTF with FOUR Districts represented ... 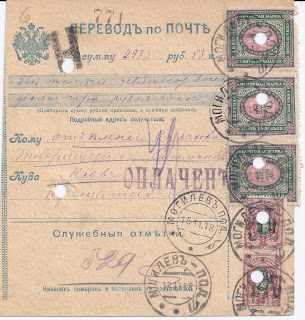 Here's another Podillia Money Transfer Form with a mixed franking of Podillia 8a and Poltava Type 1 Tridents - the latter on the three 7r perforated stamps. The card was sent from MOGILEV POD 13 11 18 to KYIV (Ukrainian language canceller on reverse).With the stamps on the back (which include unoverprinted Postal Savings Bank stamps) this card is correctly franked at 22 roubles 50 kop equal to a rate of 75 kopecks for each 100 roubles or part thereof transferred.