In Part Three of Imperial Stamps Used in Transcaucasia, published in 1978, Peter Ashford lists the cancellations of  BYELYI KLYUCH - a place which he describes as a "hill resort .... where many well-to-do Tiflissians sought to escape the oppressive heat of July and August" (page 159). He goes on to list a Type 5 cancellation and records its use only in the Independence period, on a 7 kop Letter card to which a 60 kop Georgian stamp has been added. Here is that card (click on images to magnify): 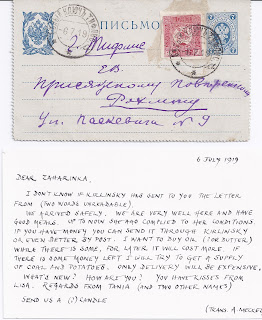 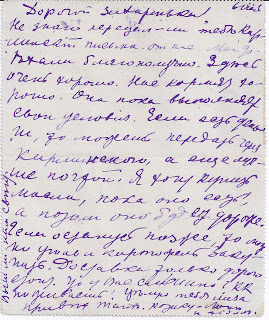 This is an item of Rokhlin family correspondence, and Serge Rokhlin's Romeko partner, Arnold Meckel [ or maybe his son; but the name MECKEL provides the - ME of Ro - Me - Ko[mpanie]] has provided an English translation for Peter Ashford.

Philatelically, the card shows early use of the St George 60 kopeck - on white paper (from the first printing) and imperforate (the imperforate stamps were issued first). Glue has been used to stick the stamp to the card which is a little surprising since these first printing stamps are normally gummed (with clear white gum). Maybe the gum was so clear that it was invisible!