The Transcaucasia Collection of Peter Ashford, 1

The Transcaucasia collection of the late Peter Ashford (P.T.Ashford,  1925 - 2010) was recently sold at auction in England. It was not a very large or very impressive collection, but it had been assembled over 50 years - beginning in the 1950s - and did include many items of interest.

Ashford is best known as the author of several important philatelic works: on Batum, Georgia, the Transcaucasian Railway, the cancellations used in Transcaucasia during the Imperial period, and in collaboration with Tchilingirian, a pioneering work on the stamps of independent Armenia. Many of these works date back to the 1950s and Ashford's collection contained a great deal of material used in writing the books.

I will publish some examples of material in the collection in my next few Blogs, concentrating on items which  which I have not seen illustrated elsewhere or which are interesting and unusual.

In Part Four of The Postage Stamps of Armenia (published 1960) Tchilingirian and Ashford (T & A) discuss the Soviet Pictorial issues of 1920 - 1923. For the First Yessayan pictorials they list "Artist's Proofs" and describe them as follows:

imperforate, on same paper as the issued stamps, except the 5,000 r., which is on a toned paper  looking brown ... Usually without gum, although a few values are exceptionally met with gum. A few sheets of each value were printed in varying shades of grey-black to black for presentation to designer S.Khachaturian, and were later split up by him in smaller blocks or singles, and disposed of on the market (page 194)

This story is consistent with the story Christopher Zakiyan tells about another issue, the First Star Set of 1921. As I noted in a previous Blog about that issue, the new Soviet government of Armenia in effect funded a trip by Khachaturian to Constantinople by supplying him with a small quantity of First Star overprints which he was allowed to sell there. Giving him some Proofs to sell as a way of paying for his more important work and foreign travels during the preparation of the First Yessayan set must have been an economical choice for the new Soviet Armenian government which had very little money to spend on anything. (As an aside, after 1991 the new Armenian government appears to have distributed New Issues via its new Embassies as a way of raising funds in local currency).

Though T&A report "a few sheets of each value", these Artist's Proofs seem to be rarer than that description suggests; I don't think I have seen them before I acquired this group - not a complete set - in the Ashford collection. Click on the Image to magnify: 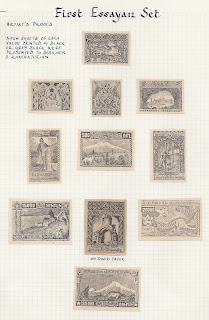