Back in 2011, I prepared the late Ron Zelonka's Ukraine collection for sale by Corinphila, Zurich. It was so vast that, inevitably, much material was sold in large lots which were unillustrated both in the catalogue of the sale and on line.

The sale did not tempt any Ukraine collectors from USA to Zurich, but it did tempt Raritan Stamps of Dayton, New Jersey who bought significant sections of the collection. In its regular auctions, Raritan now offers single items or small groups of items from the material it bought - and it illustrates them, in colour, in its catalogues.

This is important. The Zelonka collection included rare items from the Dr Seichter collection and the John Bulat collection which have never been illustrated or only inadequately illustrated in black and white. This is true for example of many local Trident overprints.

Now they can be seen in the Raritan illustrations and used for reference purposes. For example, here in the latest catalogue is a picture of the Hanebne local trident on 1 kopeck imperforate stamps (Bulat #2355), ex Dr Seichter. It may not look very impressive but it provides the basis to evaluate other examples of the much-forged Hanebne Trident and to distinguish this trident from the very similar Konstantynohrad trident:

The current catalog for Auction # 64 also allows me for the first time to compare a copy of a rare stamp in my stock with another example of the same stamp.

Though Odessa type 1 tridents were printed from a lithographic plate of 100 positions suitable for overprinting Imperial kopeck stamps, both Dr Seichter and John Bulat list the overprint on the 3 rouble 50 imperforate (Bulat 1078, unpriced). This overprint canot have been produced from the lithographic plate and must have been made either by a handstamp based on the design for Type 1 Tridents or by a fresh lithographic plate. Given the rarity of the stamp, the latter seems unlikely. Below I illustrate my copy (ex Schmidt) with a punch hole and blue crayon strongly suggesting use on a formular card and with an ODESSA cancel of 10 10 18 and Raritan's Lot 1262 which has a different Odessa cancel for 3 10 18. Interestingly, in both cases the Trident is tilted to the left which suggests to me a handstamp rather than a plate. Raritan have an Estimate of $750 on their copy, which seems reasonable for a very rare stamp, despite the unwillingness of most Ukraine collectors to contemplate such a price: 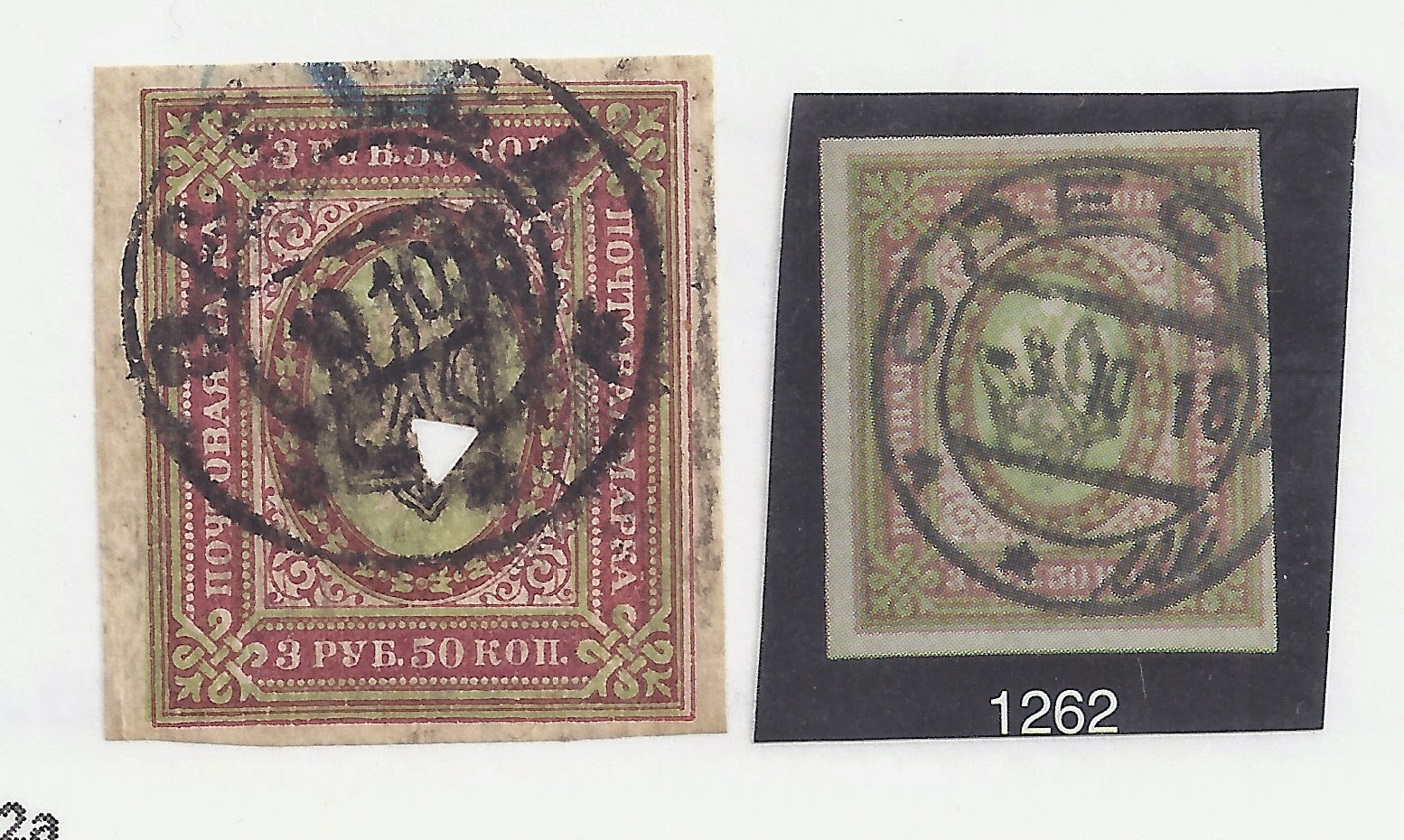