In Imperial Russia, stamps used on parcel cards and money transfer forms were often deliberately damaged before the cards and forms were sent to the archives. They had holes cut in them or pieces cut out from them and so on. Supposedly, the idea was to prevent fraudulent re-use of the (often high face-value) stamps though, actually, it was just a lot of work for very little gain.

The practice was continued after the 1917 Revolutions, notably in independent Ukraine where high volumes of formular cards were handled by post offices and regularly damaged after use. As a result, many of the stamps with Trident overprints which we encounter have holes or cuts - and from this, we infer that they have been soaked off formular cards by later dealers and collectors who got the cards when the archives were looted or officially sold off.

I have not met a collector who expects to pay the same price for a stamp with a punch hole as for a stamp without one. Some collectors won't even consider punch-holed stamps. But actually such stamps are an important source of information.

For example, many of the handstamped Tridents of Odessa (types 4 through 6) were or appear to be philatelic productions made for the benefit of big Odessa stamp dealers like Trachtenberg. I used to assume that the stamps with high catalogue values were generally limited editions produced for the stamp market. But, recently, looking at a mass of material from the Schmidt collection, I had to think again.

Look at these two stamps: 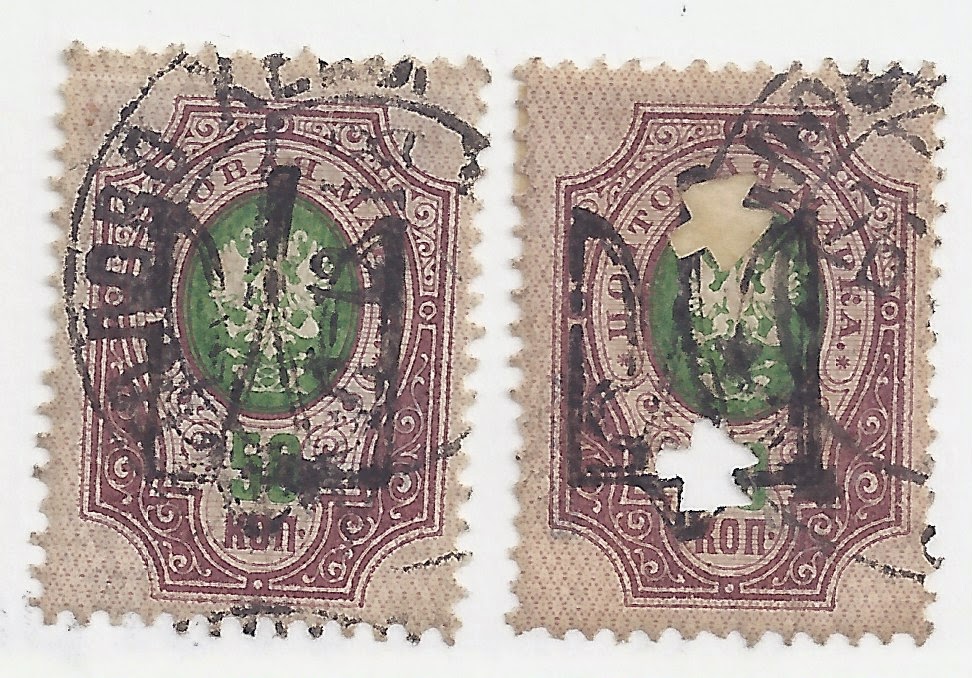 Here we have type 6b on 50 kopeck perforated stamps, listed in the Bulat catalogue as # 1351 and valued at $175 for mint and $185 for used with Inverted overprints separately listed and valued at $175 and $200. From the catalogue listing alone I would infer "Trachtenberg".

But the two stamps above have both been used outside Odessa, in fact, a long way away at a small locality APOSTOLOVO KHERSON - and one stamp has punch holes. It's from a formular card and it's very, very unlikely that the holes are forgeries - forgers just do not punch holes in stamps especially holes of this complicated type.

So this rare Trident type was in genuine postal use. We might guess this from the copy without punch holes just because of the unusual cancellation, but the punch-holed copy is much more convincing. Of course, it's possible that the stamps were prepared in Odessa for some stamp dealer who then did not pick them up and they got put into regular stock for distribution. (The left hand stamp is dated 21 12 18 ). That does not matter.

To return to the holes. No one is going to pay the same for the punch-holed copy as for the intact copy. I think this is short-sighted in the present case. Personally, I would want to have both of these stamps together in my collection to illustrate genuine postal use at Apostolovo.

Because no one likes punch holes, they are often repaired, sometimes very well as on the stamp below: 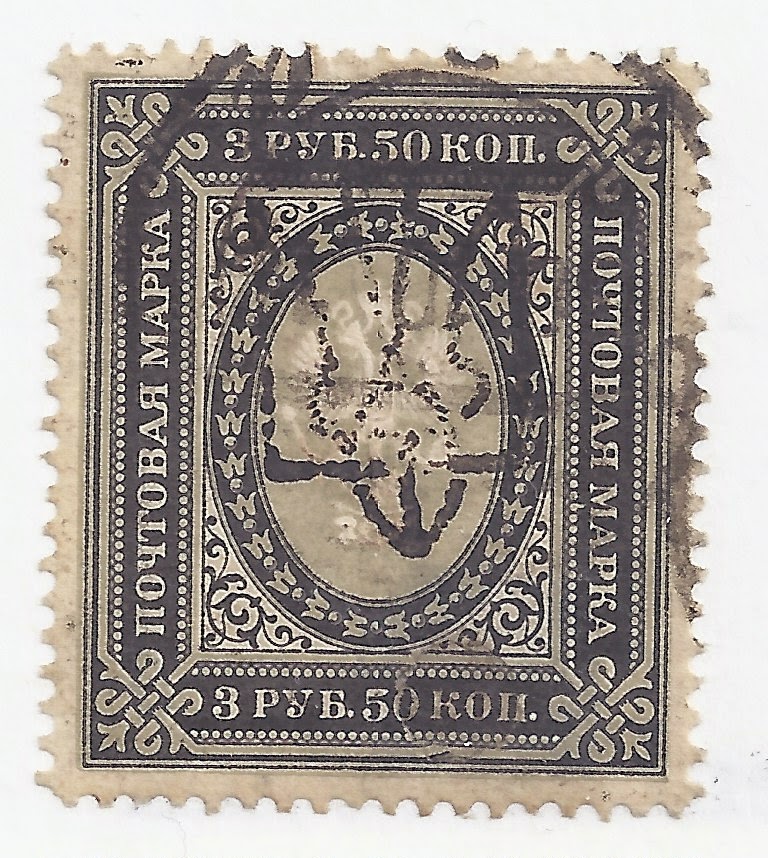 This is an example of Odessa 5a on the old 3 rouble 50. It's # 1184 in Bulat and is catalogued at $225. Now it's easy to think that these old high values were overprinted for stamp dealers. Maybe. But they were also put into use postally and are generally found with early Trident use dates ( September or - as in this case - October 1918 ). I get the impression that these old high values were used up in the context of a shortage of high value stamps. This one was postally used - you can probably see the repair which has filled the punch-hole with a piece of stamp cut from another adhesive. Click to enlarge if you can't see it.

So is this repaired stamp worth more or less than an unrepaired stamp? The person who did the work thought the answer was obvious. His or her work is not disguised - it's not a forgery - you just have to look at the back of the stamp to see the patch. But the final appearance is better. For me, the interest is in the postal use and if I was making an Odessa collection I would try to get examples of genuine use of all the listed stamps and I would have no problem using punch-hole copies.