The world's worst designed stamps were printed in large quantities and miserable looking specimens can be found in every old collection of Russian stamps. There are just five values, though you need a magnifying glass to find out what the values are.

Philatelic covers are reasonably common but examples of genuine postal use are very rare. Alexander Epstein has tried to make an Inventory of known examples. A few years ago, I was able to add one to his list.

Now I think I can add a second: 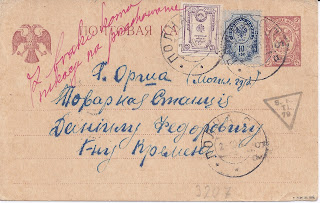 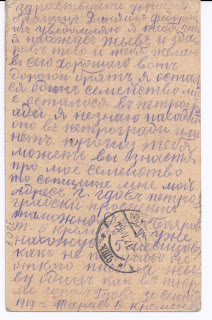 This Kerensky stationery card has a 10 kop Imperial Arms stamp added to it and then a 5 kopeck OKCA stamp. They are cancelled POLNA S P B [St Petersburg] 2 10 19. But we know from the researches of A Epstein that this Imperial Russian Polna cancel was actually being used in Gdov at this time - and the text of the card confirms this - the sender is very much in Gdov for he ends his message "I have already been here 5 months and have still not received a letter from anyone. I feel like I am in prison in the town of Gdov. 1919 Taras O. Kremen"

So far so good. The card is addressed to Orsha in Mogilev guberniya (modern-day Belarus). The small triangular cachet on the front is a known Estonian censor mark and confirms what is already believed, that mail from towns held by the anti-Soviet Northern and North Western armies was generally routed "back" through Estonia.

What about the franking? In the RSFSR, postal stationery cards were invalidated on 1 January 1919 when the "Free Post" was introduced. Thereafter, they functioned as Blanks. But it is possible that this invalidation did not apply in Gdov and that the Kerensky card contributes 5 kopecks to the franking. If the two stamps both count towards the franking, then this card is franked either at 15 or 20 kopecks. [Added: Alexander Epstein writes to me that the Kerensky cards remained valid in the areas controlled by the Northern armies so that this card is franked at 20 kopecks, the correct foreign rate which had been established by OKCA. In addition, he notes the use of an obsolete 10 kopeck stamp and says that, from other evidence, the Gdov post office appears to have had few stamps available - even the OKCA stamps - and used whatever it could find]

Now to the back of the card. The message is as non-philatelic as you could wish:

Good day, Patsits Diu ... Fedorovich. I want to let you know that I am alive and well and that I hope that all is well with you. Dear Brother, I am now alone. My family remained in Petrograd. I don't know if you are now in Petrograd or already somewhere else. Can you  please find out some news about my family. Then please write to me at my address: Town of Gdov, Petrograd Prospect, Customs [?] D... Bojarov, T.O.Kremen"

- after which he concludes with the passage I have already quoted.

What happened next? On the reverse of the card is another postmark: WARSAWA VIIIb, 15 V 21.


Well, that suggests that this card got caught up in civil war fighting and that it eventually fell into Polish hands, perhaps during the Polish-Soviet war [Added: Alexander Epstein thinks that Estonia passed on to Poland mail that it could not deliver to Russia and that Poland then released this mail after the conclusion of its own conflict with the Soviets]. Whether it was ever delivered would seem to depend partly on the meaning of the red ink annotation, top right of the card and which I cannot read. Can anyone help? [Added 25 April 2018: Pawel Urbanek provides the translation: