Most regimes, however short-lived, make it into the stamp catalogues. The Latvian Socialist Soviet Republic (LSSR) of 1918 - 1920, despite lasting for 13 months, does not. It issued no stamps. But it operated most of the postal services one would expect for the time: ordinary and registered letters and postcards; money transfers; parcel delivery. It does not seem to have offered telegraphic money transfer services and could only distribute mail within the areas of Latvia it controlled - extensive for a brief period from January to May 1919 - and to the RSFSR and areas controlled by the Soviets, like eastern Ukraine. Like the RSFSR in the same period, it offered no foreign mail service. Like the RSFSR (from 1 January 1919), it offered Free Post delivery of ordinary letters and cards. In Riga, it also operated a Philatelic Counter using just one of the many cancellation devices available in the post office. Philatelists fabricated covers with Kerensky Chainbreakers and Romanov Currency stamps and the post office obligingly cancelled them.

Recently, I spent a lot of money on a large accumulation of LSSR material. In it, I found I had 12 Money Transfer forms similar to this one, all addressed to Riga during the period of Soviet control in that city (January - May 1919): 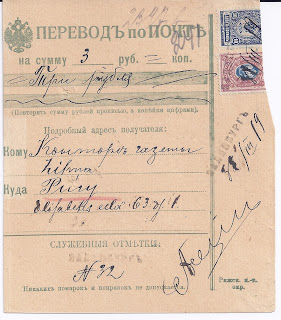 The transfer here is for a small amount ( 3 roubles) and so it is on the other 11 cards, never transferring more than 12 roubles. All are franked at 25 kopecks, so I concluded that this is the minimum fee for any Money Transfer. In every case, the stamps are severely clipped or punched with a diamond shaped device, so I concluded that the Riga post office official responsible for preventing Postal Fraud took his job very seriously - so seriously that he could not see that the chances of these stamps being fraudulently re-used was almost zero anyway. But he had a job to do and, boy, did he do it.

This particular card originated in Salisburg (Latvian, Mazsalaca) on 31 March 1919 and shows three strikes of a provisional cancellation - not really visible on the stamps but it is there. Harry von Hofmann illustrates this cancellation and the manuscript style of the clerk in his book Lettland: Die Stempel und Postanstalten 1918 - 1940 at page 43.

Then I noticed that 11 of the 12 cards were to the same address in Elisavetes iela in Riga; the one exception was addressed to [Karl] Liebknecht iela - the same place but re-named by the Soviet after the murdered German Spartacist leader. All the cards were addressed to periodicals: Zhina (10 cards), Nasha Pravda (1) and Die Rote Fahne (1). These were much easier to Google than I expected: Zhina, founded in 1904, had become the newspaper of the Latvian Communists and was published in Latvian; Nasha Pravda was its sister paper published in Russian; and Die Rote Fahne having been the journal of the Spartacist League in Germany was now the newspaper of the German Communist Party. Latvia at this time was a tri-lingual country; even the Money Transfer Form above uses two languages - for example, "Riga" is in Cyrillic but "Elisabetes iela" in Latvian - and though it is in Cyrillic "Salisburg" is the German place name.

So all these 12 Money Transfers were sending in small sums, possibly as donations but much more likely, as newspaper subscriptions - the senders would have written their home addresses on the coupons cut off and given to the person collecting the money from the post office in Riga. In that case, we can conclude that the postal service was also distributing newspapers

Great, interesting. And very lucky. Because these 12 cards are all that remained of many more. The rest had fallen in to the hands of postmark collectors: 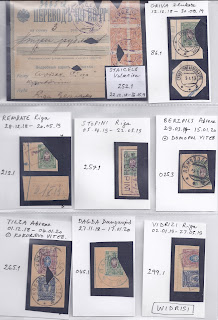 In my accumulation, I found over 30 fragments like these, all with stamps clipped Riga-style and all with 25 kopeck frankings. The majority - maybe all - would have been from Money Transfers sending money to the Communist newspapers. I have temporarily mounted them up like this giving the von Hofmann numbers to the cancellations which have been harvested from the Money Transfer Forms. Some have pencilled prices on the back.

If all had gone to plan, the intact card at the top would have been cut into at least three pieces to produce three saleable examples of the provisional cancellation. In addition, a transit cancel of VOLMAR  and arrival cancel of RIGA on the back could have been separately harvested since they don't overlap the markings on the front - thus, five saleable items instead of one!