When I buy at auction, I never know what I have bought until I get home …

Yesterday, I viewed hundreds of Russian covers – mostly Imperial – grouped into about 30 Lots in an English auction. I didn’t have a lot of time and so I had to make quick assessments and valuations. The material was in very “Mixed Condition”  and I knew I would not see every missing stamp or cut down envelope as I worked through the material. Equally, I thought I would notice the important items.

So in one Lot I decided to bid on it when I came across the following cover, not mentioned in the catalogue description of a group of about  80 covers: 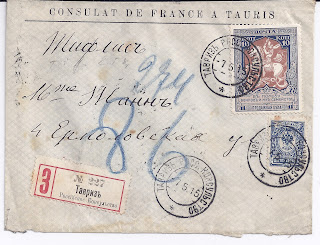 Yes, it’s a  cover from the Russian Consulate in Tabriz sent to Tiflis, with Censor mark and receiver cancellation on the reverse. The French Consulate have patronised their Ally's consulate to send this letter ( putting a War Charity stamp into the franking). The letter would have travelled up to Dzhulfa on the border and then have been forwarded by TPO to Tiflis. It’s clean, attractive and scarce – maybe even rare. I felt it justified a Bid at the Estimate for the whole Lot even without looking at the other material. So maybe I skimmed through that too fast, because when I got home and looked again today, I pulled out this: 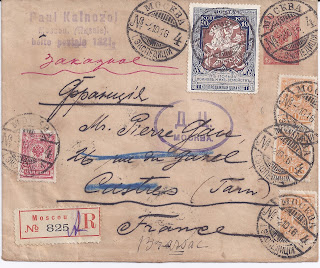 This is such a “busy” cover that it is easy to miss the most important thing: top right corner. This is a stationery envelope for 3 kopecks. Wait a moment: When did I ever see a stationery envelope for 3 kopecks? I could not remember any … so I looked in Ilyushin and Forofontov’s 2004 Moscow – published book on Imperial Russian Stationery 1845 – 1917. Yes, this envelope exists , it dates from 1909 in two formats (this one the larger), and it’s # 51 in their catalogue with a valuation of “50” in used condition, which is really nothing in their scale of valuations. So I wonder now why I have never seen this envelope before .. perhaps I just did not notice it! At 3 kopecks, it would have been used for mailings benefitting from concessionary tariffs - printed matter or samples without value, for example.

Then I had another surprise. Nearly every item in the Lot was Imperial, though the catalogue description read “1910 – 1919”. Here's the 1919 cover. It was  among a bunch of covers collected for their Registration labels. I looked at the label on the front as I browsed through the bunch: 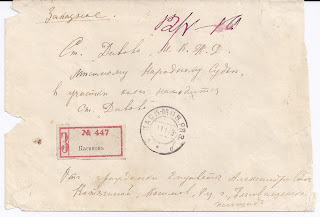 Today I looked at the back: 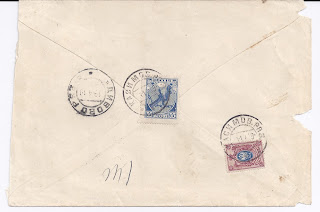 This is a registered cover from January 1919 franked at the newly-introduced rate of 50 kopecks in the tariff of 1 January 1919 which made the sending of ordinary letters and cards Free. The 35 kopeck Kerensky stamp was widely distributed in Bolshevik Russia at the end of 1918 – it is usually said that it was issued to mark the 1st Anniversary of the October ( subsequently November) Revolution. But it's very scarce on non-philatelic cover like this, addressed from Kasimov in Ryazan guberniya to a People’s Court at Divovo in the same guberniya.

I won't spoil things by dwelling on the disappointments: 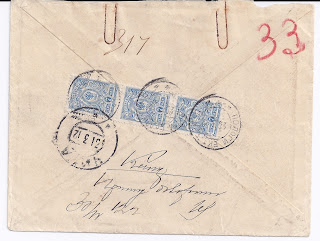 
Added 8 December 2015: Alexander Epstein sends me these examples of the 3 kopeck stationery envelope. Note that they are all with added stamps and none of them dated anywhere near Ilyushin and Forofontov's 1909 date. Maybe the issue of these envelopes was delayed? 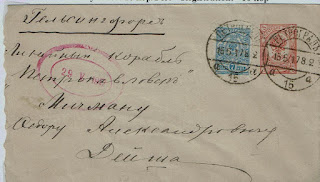 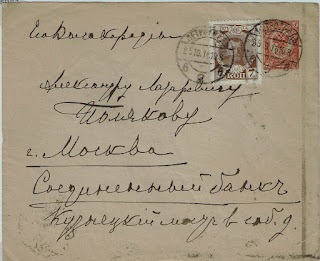 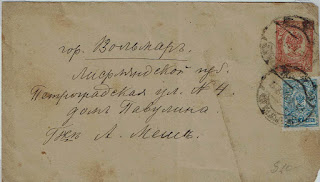 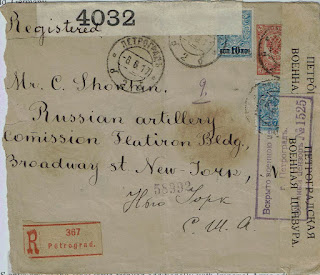 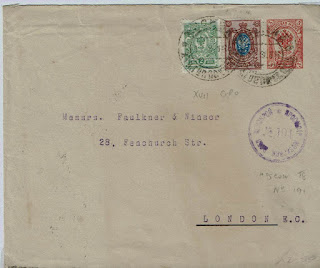