Faberge is the collection which keeps on giving. Agathon and Oleg never organised it all or disposed of it all in a systematic fashion and undocumented material still keeps appearing, as it did on 21 September in a London auction which offered 27 lots of mainly Faberge Imperial Russian fiscal material.

In the same period of fifteen years before World War One when Agathon was assembling his Zemstvo collection, he was also assembling a Russian Imperial fiscal collection in very much the same way. He bought common stamps in big quantities and then tried to plate them or looked for errors and varieties (and found them). He made notes on the backs of stamps recording his discoveries, though in the case of common stamps I do not think he always wrote the name of his supplier and the price paid. He bought scarce stamps and also fiscal documents and stamped paper, though some categories of document were hard to obtain. Only when things like court archives were later disposed of or simply looted did complete documents become available. When Agathon got to Finland in 1927 there were probably some emigres happy to sell him old documents from their family archives.

I think Agathon mounted some of his collection on album pages and I think that Oleg re-mounted them, as he did the Zemstvos. Oleg also put on to album pages stamps which had never been there before. This much I infer from the hinges on the backs of a great deal of ex-Faberge material. But at some point all the material was taken off pages. In contrast, when after Oleg’s death, Corinphila sold the Faberge Zemstvo collection in 1999, about ninety percent of it was on modern, massively annotated album pages which represented many meters of shelf space.

The recent London Faberge sale included a modern stockbook which includes both stamps which look like remainders of something else, but also carefully selected choice pieces which would display well or which have research interest. As an example of a visually attractive piece, see the scan of this Moscow Court stamp. Oh, and I nearly forgot - it's not only pretty, it's also imperforate between vertically: 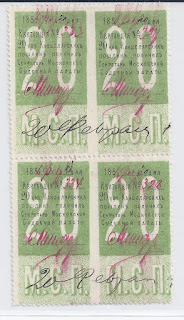 As an example of a research item, consider the scan of this Moscow Police stamp. On the 21 January 1907, Agathon bought two blocks of four from Lentz [abbreviated as often the case to Ltz] who in turn had got them from the stock of the Belgian dealer Moens [ Moens Lager, in pencilled German]. Separately, a pair has been acquired and either Agathon or Oleg has then re-joined what are parts of a separated block, using slips of stamp hinge. This gives an unusually large mint multiple for this early stamp. But though the block has two modern hinges (presumably Oleg’s), we now have no indication of how it was written up. 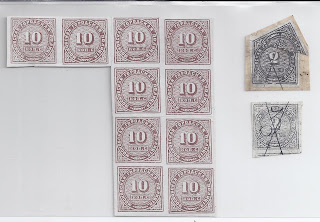 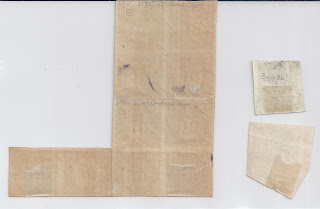 Agathon’s and Oleg’s close attention to the detail of common stamps did pay off. The stockbook contains, for example, a bisected 2 kop stamp used to make up a 3 kop rate. That is not unusual. But it also contains a 2 kop stamp uprated in black ink to make a 3 kop rate, a fact I only discovered when I turned over the stamp and read on the back 3 auf 2k! I would be interested to know if this variety has been recorded elsewhere. I show it above along with an example of the bisect.