More from the Faberge Fiscal Collection

In the period before World War One, obtaining older fiscal stamps and documents from smaller cities and towns was probably as difficult as finding stamps and covers from the more distant Zemstvos and perhaps more difficult. The collector societies in St Petersburg and Moscow eventually set up arrangements with many Zemstvos to supply new issues, and the Zemstvos were often co-operative when they realised that their stamps could yield a significant income. In consequence, they began to issue stamps rather in the way that Liechtenstein or Monaco do today. But I doubt that writing to distant courts asking for their stamps would do anything other than create suspicion. To this day, the pre-1914 fiscals of small administrations are very scarce, especially on document. So it was a nice surprise to find in my London purchases the following item: 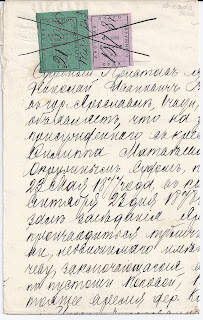 I have seen the stamps of Yaroslavl before but not on complete document. This one, dated 1878, and folded for the illustration was obtained by Agathon Faberge in September 1913. He got it from Göschiel [ not a supplier I have encountered before ] and paid 15 rubles [ pd – k – 20 IX 13 Göschiel: I decode the “k” as “ kauft” meaning purchased rather than “k” as in kopeck. See Hellman and Stone, Agathon Fabergé, page 242 ].

It seems that B E Saarinen picked out some of these provincial fiscals for re-mounting and I assume that the simple exhibit page below is his work (further information welcome). I haven’t seen the two listed stamps of Kolpino before. Agathon F got the top piece with the red stamps from Karing in 1914 but no price is indicated. Agathon has also worked out the date written across the stamps as 15 September 1898. There are no notes on the back of the strip of blue stamps but I suspect they are also ex-Faberge. 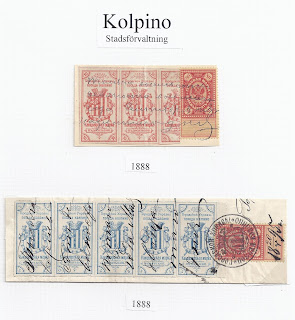 Faberge was able to acquire some court fee stamps in bulk, notably from Baku, where someone cut off many hundreds of the locally-produced stamps from their original documents. They ended up in Faberge’s hands and were eventually dispersed. The Faberges did begin to study them, though the published plating study is due to Jack Moyes. The stamps were printed like raffle tickets in strips of six. The counterpart to the left of the MAPKA part was a receipt KVITANTSIA. These are rare. There is one example in my new acquistions, and on the back Oleg F has written FOTO, suggesting that an article or book was contemplated on the lines of the Zemstvo book for which Oleg also wrote FOTO on the back of items.

Despite having had a stock of these Baku stamps since the 1990s I had never seen a strip of six until the London sale and now I have just one such strip, with no acquisition note on the back

More difficult than any provincial revenue stamps are the tax banderoles and labels applied by the Maria Feodorovna charities to packs of playing cards, over the production of which they held a monopoly. People who played cards were wasters rather than hoarders and simply did not think to keep the bands and labels for future collectors. So it was an agreeable surprise to find in my London purchase a complete but empty playing card packet. 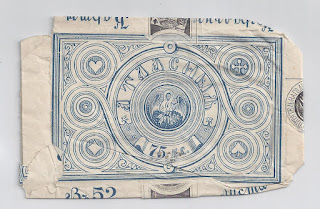 The blue front packet design is less elaborate than the beautiful red and black design illustrated in John Barefoot’s Russia Revenues catalogue [Plate I ] and on this Blog on 13 January 2016, and does not look like the work of the state printing works. But whereas the tax work is done by the later red and black design, the actual tax work is done here by the black strips which seal the packet horizontally and vertically and which are intact on the reverse of the pack. Like the blue design they incorporate the image of a pelican feeding her young which is the logo of the Maria Feodorovna charities. I illustrate these sealing strips on my Blog of 13 January 2016