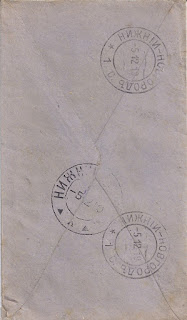 Postal Censorship in Russia is a popular collecting field. The interest of the cover above is that - according to Robert Taylor - it shows the earliest recorded use of a Three Triangle censor mark. The ordinary letter has been sent during the Post Free period from a small town in Nizhni-Novgorod guberniya to Nizhni - itself. Here it received two strikes of a rather strange NIZHNI NOVGOROD * 1 C   5 12 19 cancel - Taylor says this is a machine cancel  but there is something odd about "* 1 C" - I would expect "* 1 * " . I will have to find some more examples of the machine cancel to see if my expectations have any basis ... [Note added: Go to Ivo Steijn's Comment below for a response to my doubts]

It also received one strike of a NIZHNI - NOVGOROD 5 12 19 with three triangles at base. These are so clearly struck (as are the letters "NIZH.." that it is clear a brand new device is being used. According to Taylor, the only other Three Triangle censor mark known used in 1919 is one from SARATOV used on 19 December 1919.