Slania? Yes. But what about Zarins? 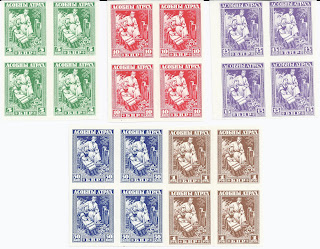 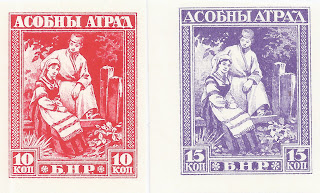 Every dealer at  stamp exhibitions has been asked for examples of the work of Czeslaw Slania (1921 - 2005), the engraver of many beautiful stamps. Look on the Internet and you will find websites devoted to him with comprehensive listings of his work.

But Rihards Zarins (1869 - 1939)? No one has ever asked me for examples of his work. You can find a short Wikipedia page for him but I don't think you can find an inventory of his work. He wasn't an engraver but rather a designer.

Zarins (sometimes Zarinsh or Sarrin) was a highly trained graphic artist who became Technical Director of the Imperial Russian Printing Office. In this capacity he was involved in the design and production of the  War Charity and Romanov Tercentenary stamps. Later, he is credited with the Kerensky Chainbreaker stamps.

In 1919, he was appointed Director  of the Latvian State Printing Works and designed several early stamps - the Dragon Slayers for example. He retired in 1934.

He is also credited with the design of  the unissued Asobny Atrad stamps of the Belarus National Republic. I think these were printed in Latvia and sheet margin enumerator marks are like those found on Latvian sheet margins of this period, so they were probably printed in the State Printing Works. To my mind, all this shows a serious intention behind the production of the Asobny Atrad stamps - they were not cheap and quick productions for some philatelic swindle.

This is also suggested by a curious detail of the set. The design of the 15 kopeck differs in several details from the design of the other values. Someone  has gone over the design. To the left of the girl's shoulder some messy background detail has been removed. The shading on the bench at the left side has also been simplified - cleaned up. The plant growing at bottom right has been toned down . Everywhere you look there are small differences. In addition, the inscription ASOBNY ATRAD is completely different and at the base the flowers on either side of the "B.N.R" have seven petals on the 15 kopeck and eight petals on the other values. I have no explanation of why this 15 kopeck is so different...

Maybe out there somewhere is a Zarins collector who knows a lot more and who has produced an Inventory of Zarins' work. If not, there is an interesting challenge here.

My illustrations of the BNR stamps show ungummed, imperforate examples from the original printing. Forgeries exist but are easy enough to recognise.

[Note added: I discover I have an undated but probably 1926  article by George Jaeger, the Libau/Leepaja stamp dealer, who writes ( under the pen name George Neljubin) about a 1926 New York exhibition of Romanov essays and proofs. He credits Zarins (which he spells Sarrin) with the design of the 2,3,10, 15, 20 kopeck and 5 rouble Romanov set. His name does not appear on the list of engravers. There is also relevant information in  L.L. Tann's The Imperial Romanovs (1977) but this is probably not easy to find ]