The last General Revenue stamps of Imperial Russia, issued from 1907 onwards on unwatermarked paper, were printed in sheets of 80, with two panes of 8 x 5 side by side separated by a central vertical gutter. Within each pane the top four rows are organised tete-beche with (as it were) half a tete-beche in the bottom row. Quite why such a complicated sheet make-up was selected, I don't know.

In independent Armenia, these Fiscals were first Armenianized in the Dashnak period with perforated initials - a subject too complicated for a poor old Blogger - and later in the Soviet period overprinted from lithographic plates. I do not know if the plates were "double size" to print a sheet of 80 at one go, or arranged as 8 x 5 plates to print half the sheet - the latter seems much more likely.[ See Footnote] What is clear is that there was one plate to overprint the Fiscals with the Soviet Arms of Armenia and another to print the new value. This is clear from the examples below: 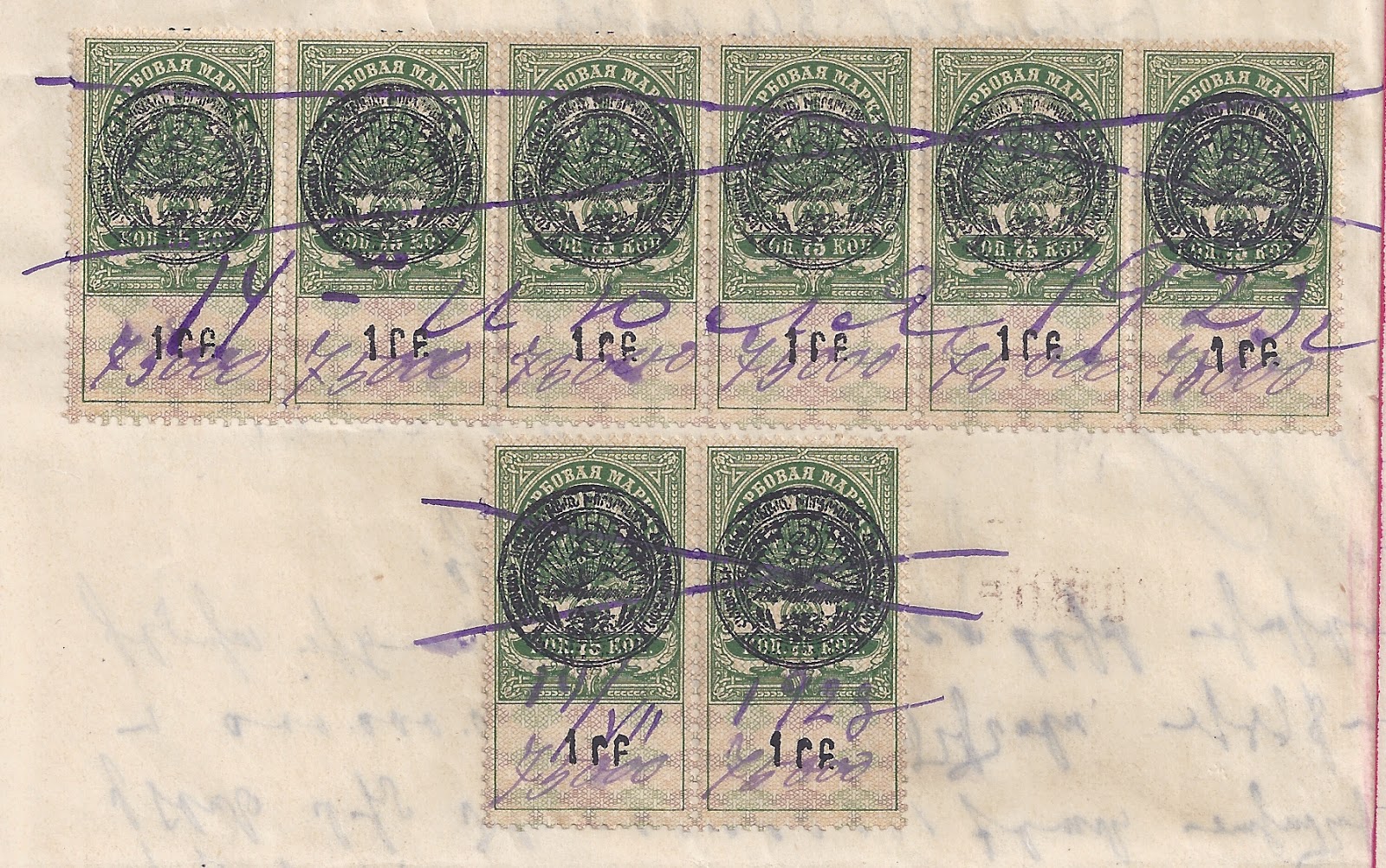 The first image shows a strip of eight with selvedge at the right showing that it is from the left of the sheet. The Arms are printed low down in the upper half of the stamp but the value is in the middle of the bottom tablet (along with later Mss revaluations which turned Zakiyan # 16 into Zakiyan # 23). In the second image, what is probably a divided strip of eight shows the Arms a few millimeters higher than on the first strip but the value overprints still centrally placed. In other words, the two overprints are independent of each other from two plates.

Closer inspection shows that the form of the value "1 rf" varies from stamp to stamp. In principle, it is plateable and if a plate of 5 x 8 was used, then it should be relatively easy - a plate of 10 x 8 is going to be at least twice as hard!

The Arms must in theory be plateable but the density of the overprint makes it very difficult to attempt in practice. We don't know what the size of the transfer block might be (though Zakiyan suggests a single cliche). If I was going to attempt to plate the Arms (I'm not),then I would start with something relatively clear like the hammer and sickle and look for variation there. But it's possible that if a single cliche was used for the Arms, then all we will find is idiosyncratic variation from the way in which an individual sheet happened to be printed (from a re-inked plate or a dry plate and so on)

Meanwhile, the examples above show how Armenian documents of this period (1923) are often attractively franked with multiples of the same revenue stamp.

Footnote 28 April 2014: I have been looking at a large collection of documents with these Fiscals. Horizontal strips of 8 or broken strips of 8 are quite common. Frankings of more than 8 stamps also exist (the highest I have seen is 20), but in no cases are there any examples of cross - gutter [inter-panneau] pairs. This suggests that at point of use, the sheets of 80 were received in half sheets of 40. That is also a reason for thinking that the cutting in half was normally or always done as part of the printing operation using an 8 x 5 not 16 x 5 plate. A convincing [ genuine] example of a used cross-gutter pair would necessarily modify these claims