Assessing and Expertising Revenue Documents - Some Examples from Armenia 2

This Blog is really about The Decay of Forging.

The great forgers of the past - Fournier, Sperati and many more whose names are less familiar - took their work seriously. They were very knowledgeable, they had remarkable craft skills, and they invested heavily in the reference material and equipment necessary for their work. They approached their business as a life-time commitment. They could claim a place on the Roll of Distinguished Philatelists.

Nowadays, forgers are looking for a fast buck (preferably a hundred bucks) on ebay.

First of all, look at this 1920 document from Erivan: 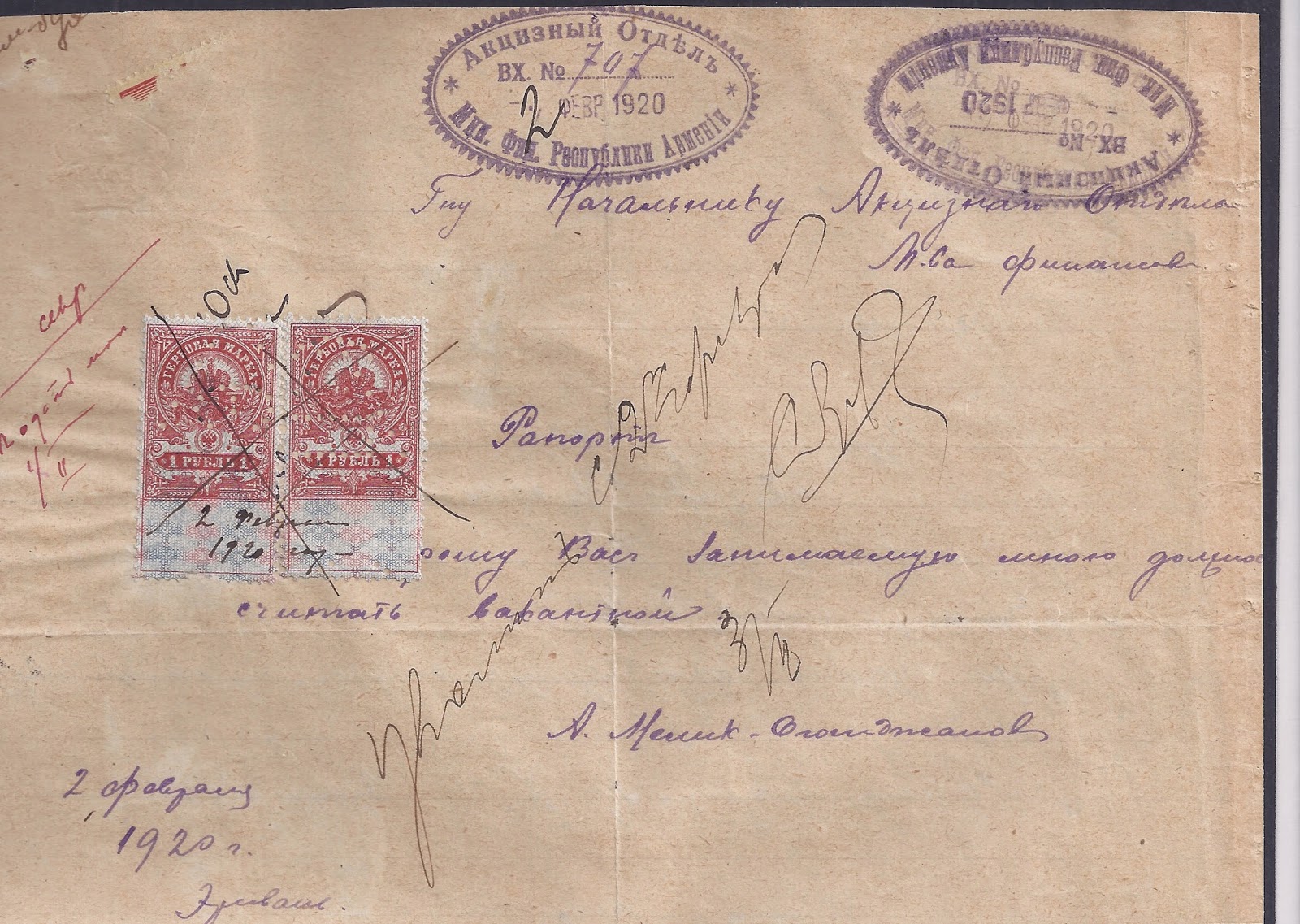 This is a cachet of the Ministry of Finance of the Republic of Armenia, in this case dated 2 February 1920. I have seen this cachet before and I believe it genuine. It's very well made and here it is clearly struck (the strike repeated presumably to get it the right way up, on the left). The violet ink is in the range of shades and intensities you would expect in an office still probably using (up) Imperial supplies or still using old Imperial period suppliers. The only puzzling thing is that the cachet is in Russian rather than Armenian - maybe the workshop able to make such devices was not able to make them using Armenian script.

If a forger had made this cachet, they would have made more use of it than to decorate this document - they would, for example, have used it to tie stamps to the document since that is always more convincing than manuscript ties.

Now jump forward and look at this June 1923 document: 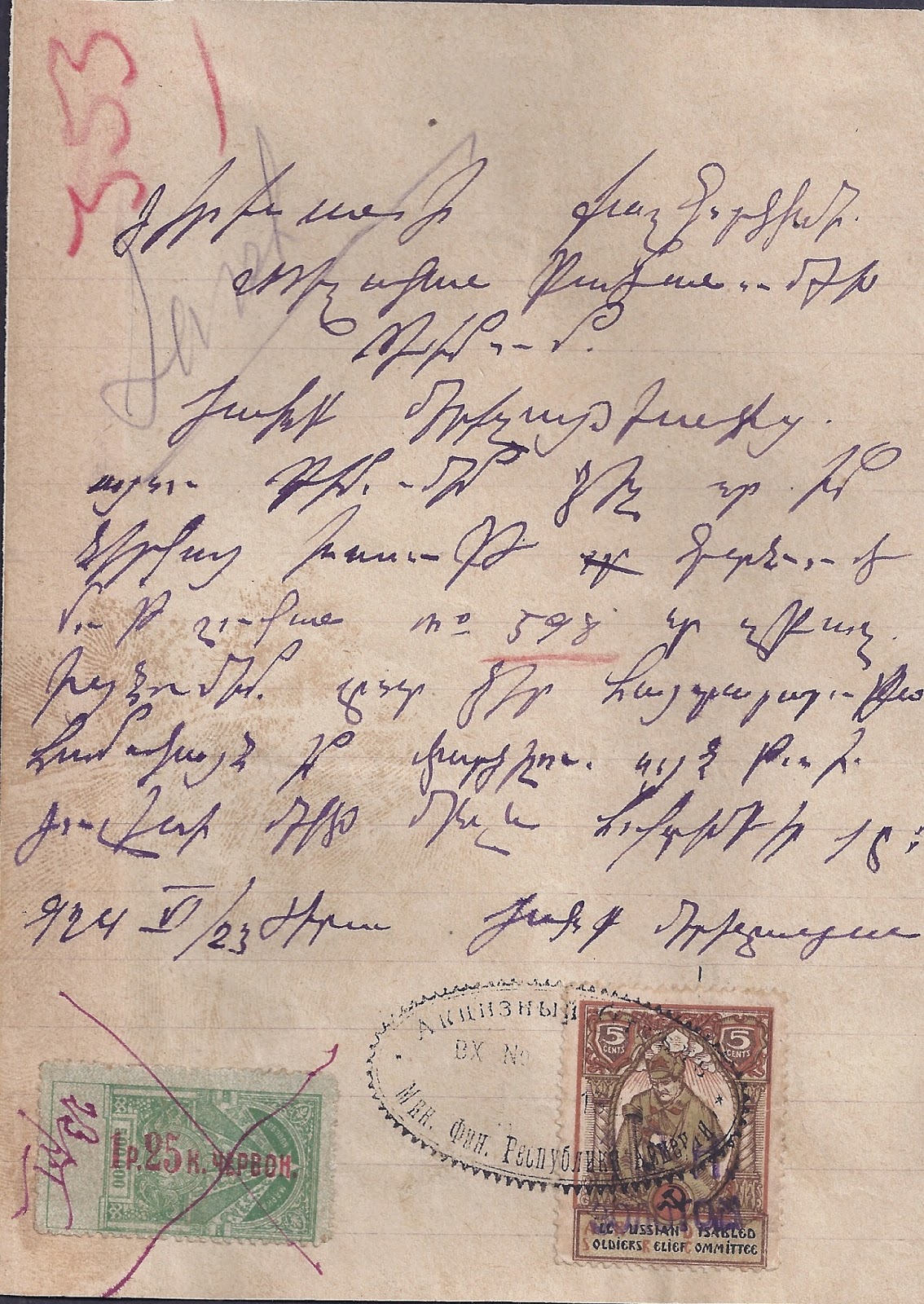 This is a rather ordinary looking document, with a relatively common Transcaucasian fiscal on the left [Zakiyan # 8] but a rather exotic stamp on the right: a Soviet War Charity stamp denominated in US dollars (5 cents) and inscribed in English. The stamp has been overprinted to indicate a conversion to Gold [Zoloton] kopeck currency. Interesting.

Now have a look at the cancellation which ties this stamp to the document: 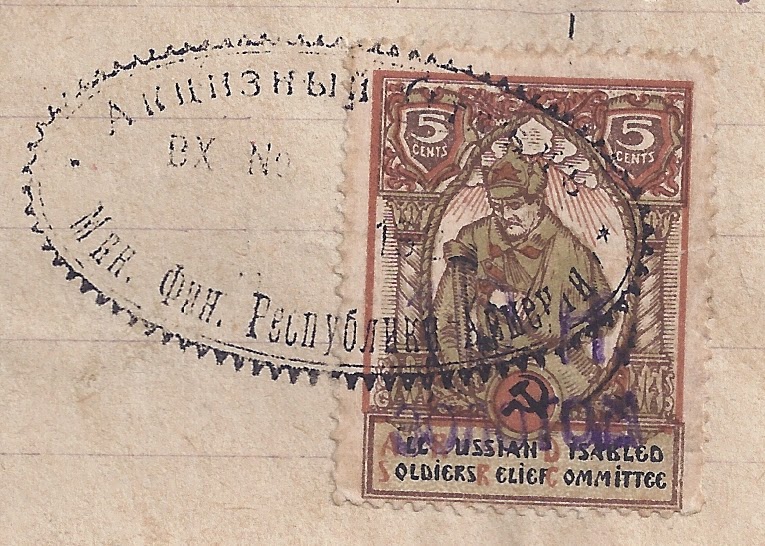 Could this be the same cachet as I described above, but now struck in black and without a working date line ( just "192 _") even though we know that the Soviets generally hurried to replace old (in this case, Dashnak) official cachets with their own versions

Answer, NO! This cachet is a crude forgery of the Dashnak cachet. You would need specialist equipment to determine how the forgery was made and used, but my guess is that this strike could be computer-generated. You would start with a scan of the original cachet, eliminate the background, eliminate the unhelpful date details and finally print off in black. Along the way, detail has been lost.

So I conclude that the War Charity stamp does not belong to this document. It has been added and rather than tie it with a pen cross, the forger has made a little more effort with this cachet. After all, think of the appeal to the American market of this 5 cents label!

But in the old days, a forger would have gone to his workshop and made a carefully-crafted replica of the original handstamp and would have tried to get right every detail.