But as is so often the case, the old Tariff was remarkably persistent. Here are three registered letters from Petrograd in August 1921, one before the Tariff change (10th), one on the day of the change (25th) and one a few days later (30th). You would expect post offices in Petrograd to know what they were supposed to be doing, and even if the stamps on the second and third letters have been silently revalued  x 100, they are still franked at the old rather than the new rate: 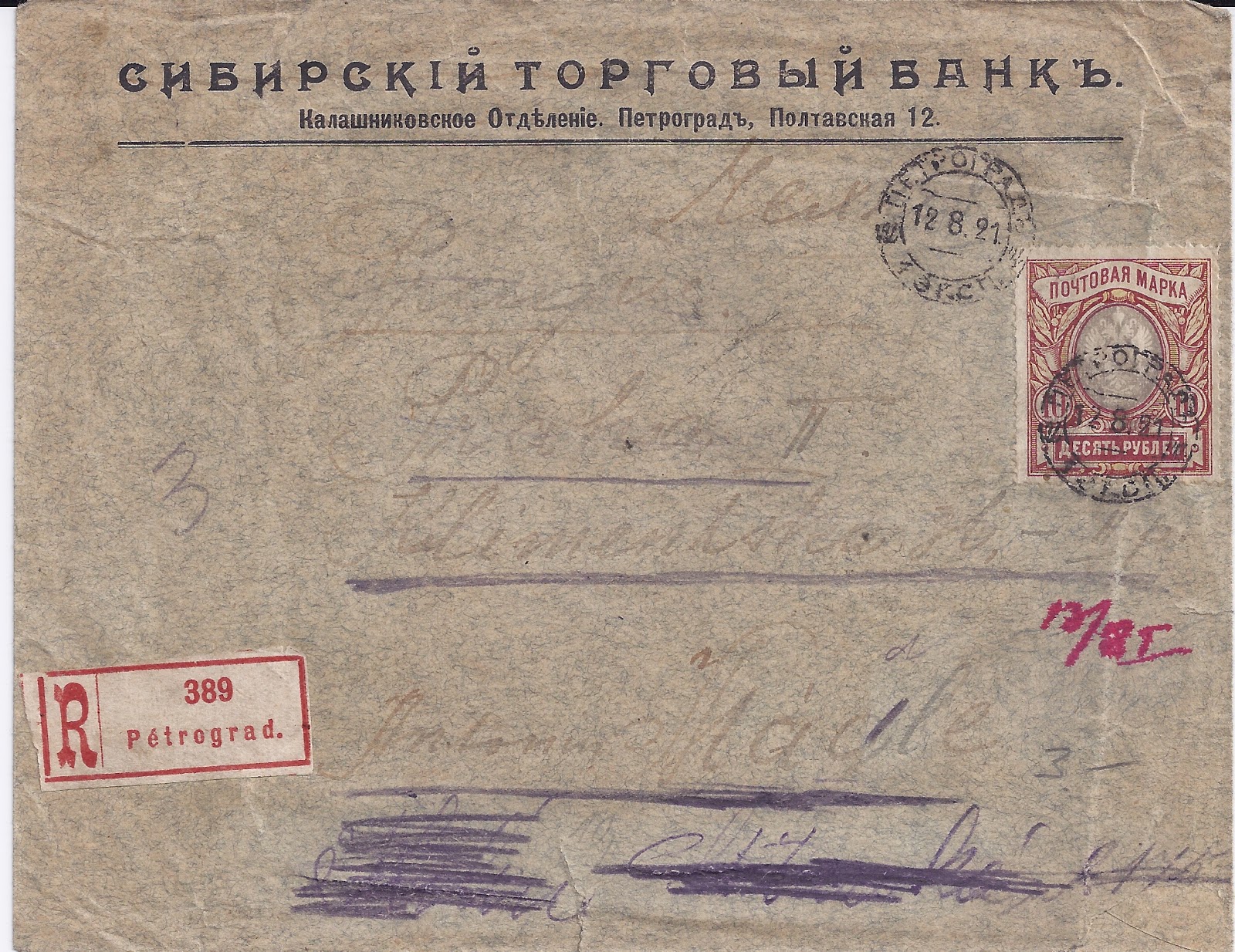 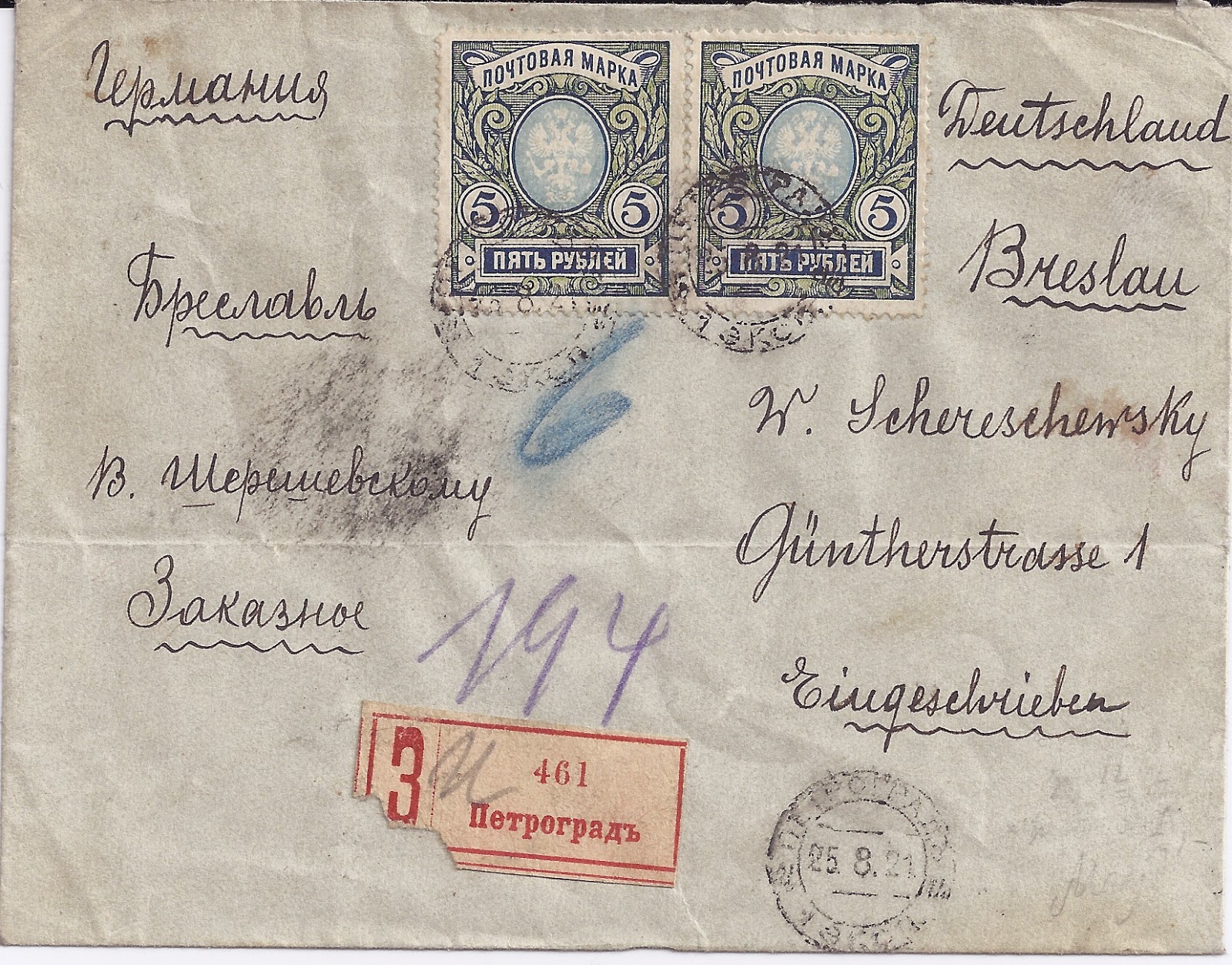 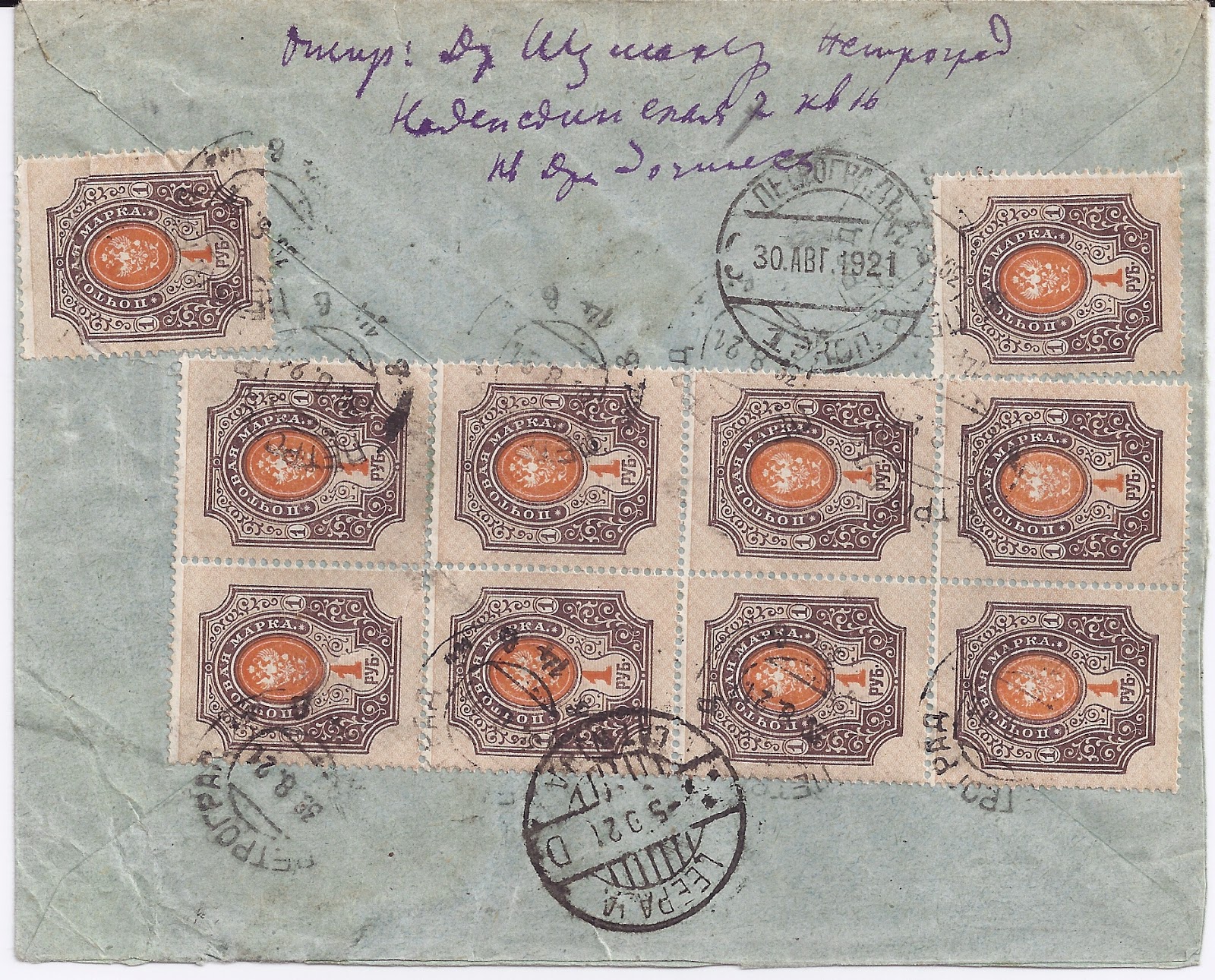 The next two examples of 10 rouble mail from earlier in the year (April and May) helpfully show how Registered mail was routed through Berlin. The April cover from Tambov to France has picked up a Registration label in Berlin and the May cover Syzran to the USA has got a violet Berlin Auslandstelle cachet - upside down at the bottom of the cover - which (I think) says that it has been received from abroad as registered mail: 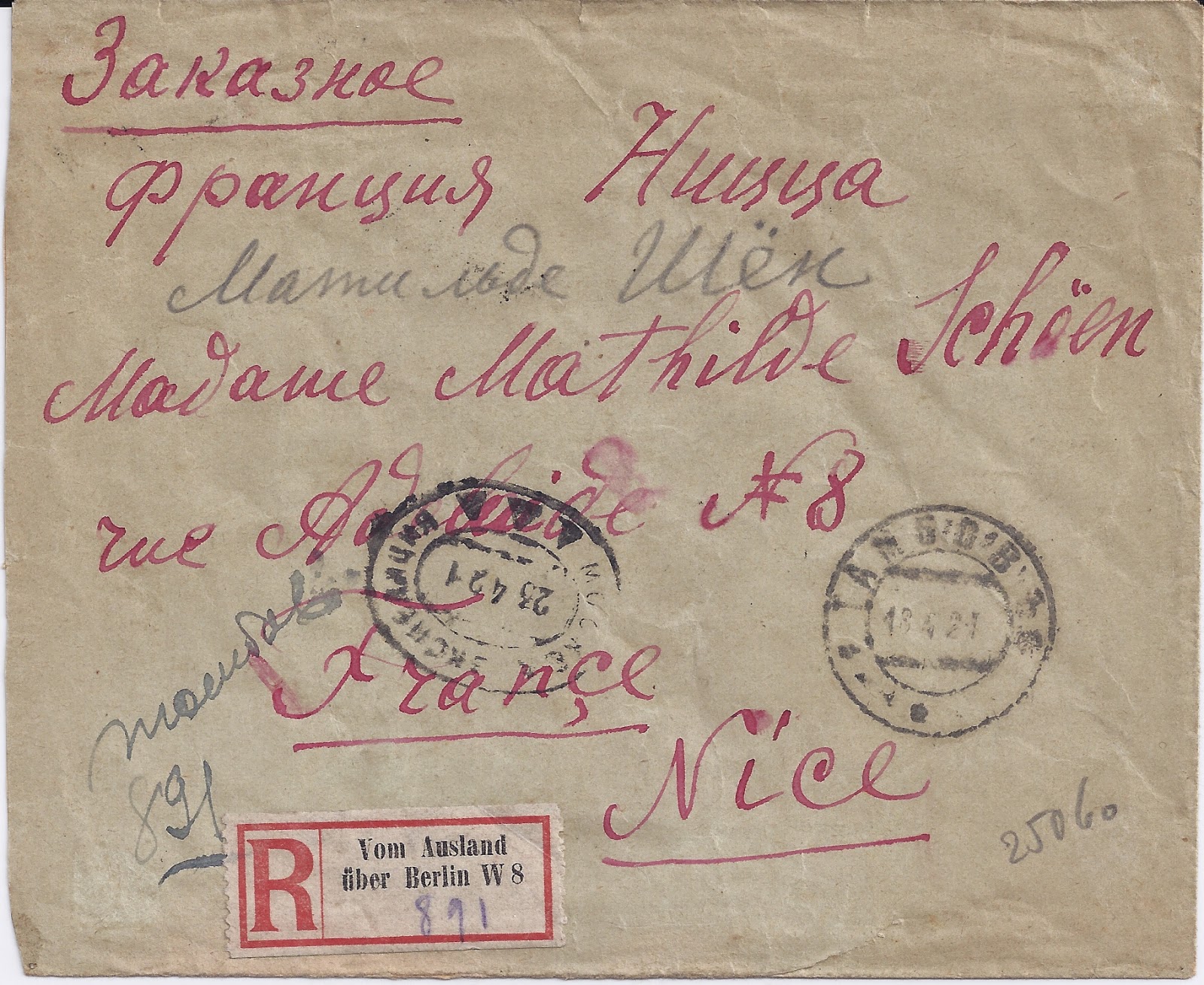 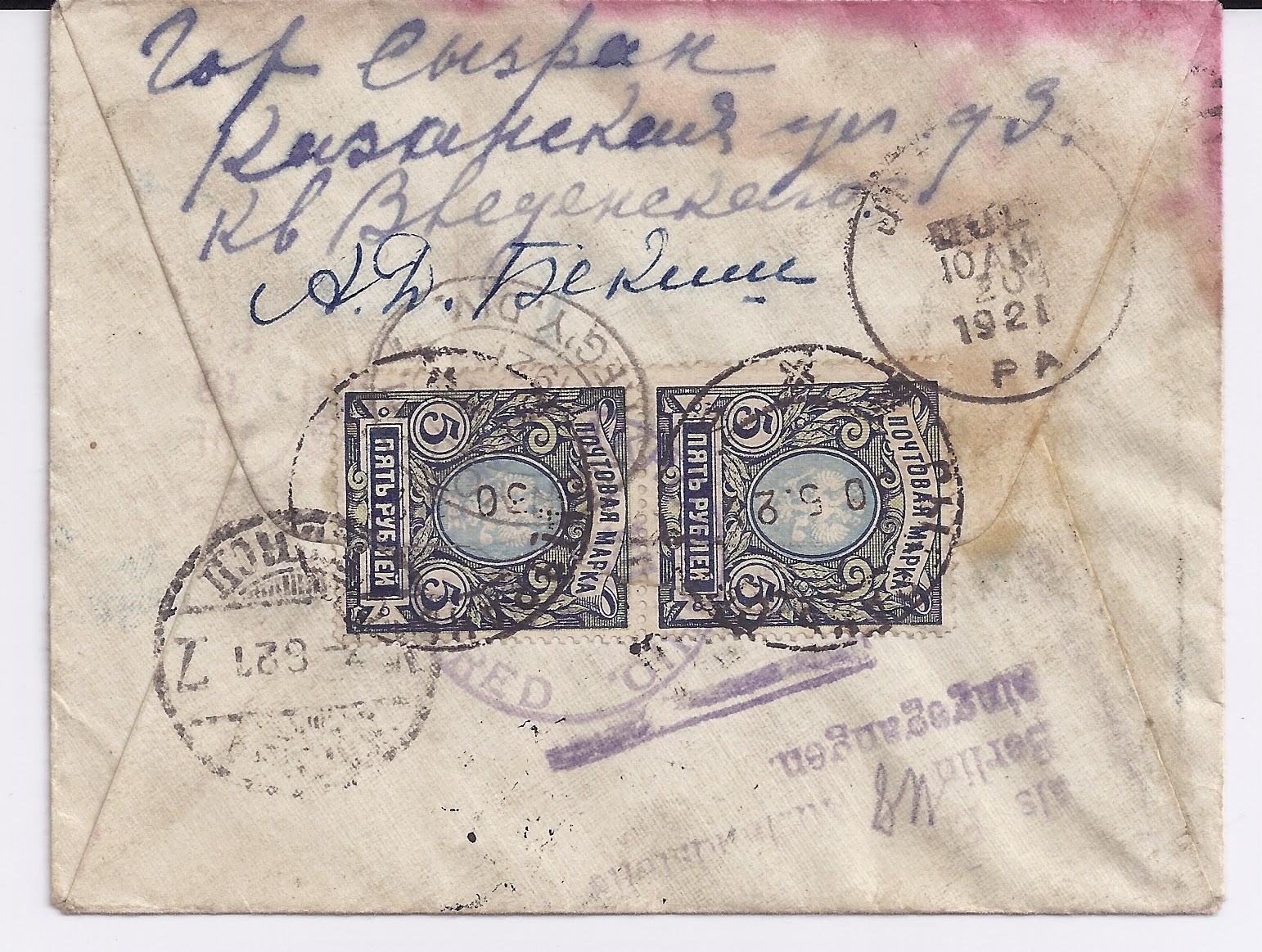 I would also like to make a study of postcards abroad in 1920 - 1921 but I don't have very many. So if you have any for sale, let me know at trevor@trevorpateman.co.uk

21 August 2014: Alexander Epstein comments:  I have studied this matter of RSFSR foreign rates in 1920 - 21 in detail and collected a lot of information concerning the existing covers. I described my conclusions in an article in Deutsche Zeitschrift für Russische Philatelie #94. You can also find it  in English at:  http://www.arge-russland.de/1634328.htm. Since then I have continued to expand the data base. I published an updated version of this article in Russian (Journal RUS).  The matter was very complicated in 1921 on the local level. I would like to add also that there was  official permission from the Central Postal Administration to use the old 1921 tariffs (instead of those of 25 August) till October (!) while post offices were waiting for the delivery of the new Arts and Industry stamps.