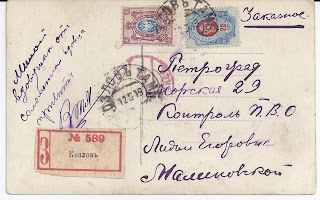 Most stamp dealers know that Registered postcards are unusual items from more or less any country. Maybe you only Register a postcard if you are worried about the reliability of your postal service or because your postcard contains some very important Secret Coded Message ...

Anyway, dealers know enough to put the price up for a registered postcard, even one as unattractive as this (the picture side is just a photo of a painting in the Hermitage gallery) and for which I paid £35 (50 €) when I found it in another dealer's box. I didn't ask for a discount.

I don't know how much I would have paid to get it because I have never seen one before (unless I saw one and failed to appreciate what it was ...).

What I illustrate here is a postcard from Bolshevik Russia during the Free Frank period  1919 - 21 when ordinary (non-registered) cards and letters travelled free. Not many travelled - this was the period of War Communism when the Bolsheviks were in a desperate situation with control over only part of the territory of "core" Russia. Even less Registered mail travelled.

Registered mail still had to be franked and the 35 kopeck paid on this 12 May 1919 card from Kozlov to Petrograd (the receiver cancel in red) represents 10 kopecks for postage ( suppressed for an ordinary card) and 25 kopecks for Registration. That was the Tariff set on 1st January 1919 when the Free Post was introduced.

This card will join an accumulation of 1919 - 21 Franked Mail - all covers - which I have been keeping back to study and write up. That accumulation extends to about 50 items; this is the first Registered postcard. Of additional interest is the Kozlov registration in a smudged printing on a poor quality paper which I think is a War Time economy (or even post - revolutionary ) production. I have seen similar labels from other places.

How much is it worth? That is actually unknown until some early Bolshevik Russia collection appears at a serious auction and serious collectors have to think about what they will pay for things they are lacking and may never even have seen before. At the moment, there is no obvious market in such things. If I was working for an auction house (as I occasionally do ) and obliged to put a Start price on the card above I would Start it at 150 € and would be disappointed to see it sell for less than 300 €. If it went for 1000 € I would think that showed at least two collectors in the world clearly understood what they were competing for.

Added 22 January: Alexander Epstein kindly supplies examples of Registered postcards franked at each of the three Tariffs of the 1919 - 21 "Free Post" period: 35 kopecks, 4 roubles and 10 roubles. The last two show cards franked with kopeck stamps revalued x 100. Note that on the first card, the uprated "10" overprint counts towards the franking; the next three cards are used as Blanks (correctly so - statoneries were invalidated on 1 January 1919); the last card is a Ukrainian formular card. Epstein writes that it took him many,many years to find them. They are indeed rarities and I guess this is now the largest group shown on the Internet: 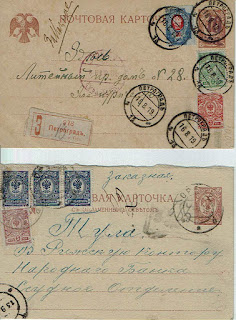 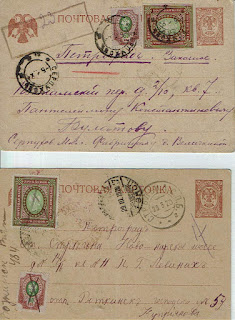 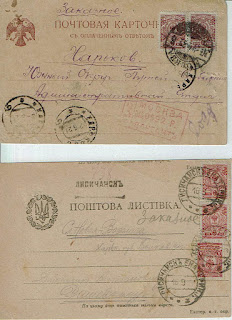 Added 3 February 2016: Dr Hans Grigoleit sends me scans of the remarkable cover and card below. Azerbaijan also operated a Free Post system in 1920 - 1921.These items  illustrate the continuing use of Musavat stamps in the early Soviet period: 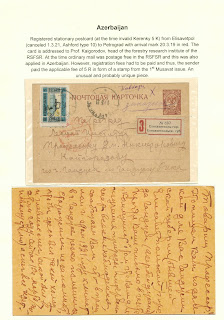 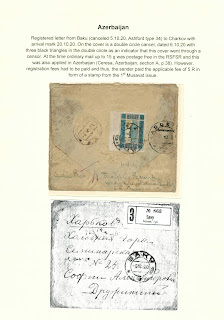 Added 3 February 2016: Alexander Epstein now contributes a postcard and a cover from Azerbaijan for the 1920 - 21 Free Post period, both are rare items: 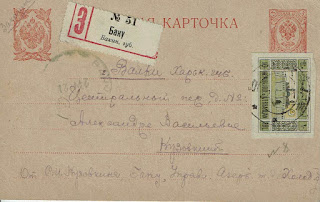 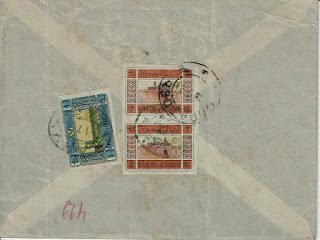 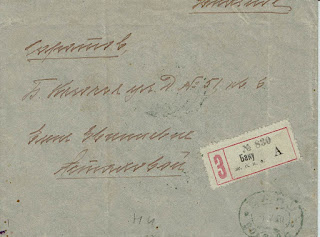 Added 7 February 2016: Robert Taylor contributes this nice Esperanto registered postcard from Petrograd to Switzerland, sent late in the Free Post period (May 1921; Free Post ended in August). Like many items mailed abroad at this period, it is franked at the Inland rate of 10 roubles not the advertised Foreign rate which at this date would have been 7 or 14 roubles. 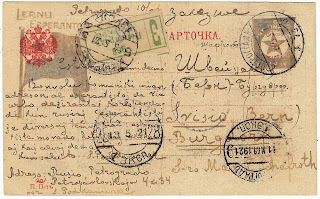 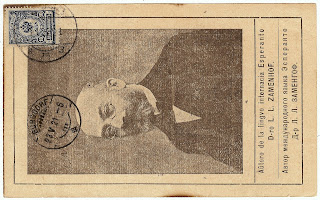