Philatelists are familiar with Imperial Russia's Maria Feodorovna administration and taxes mainly from the Advertising Letter Sheets produced in the 1890s and early 1900s.  The advertising allowed the sheets to be sold at below the face value of the postage stamp imprinted on them. They are attractive items, popular with collectors, and command 150 - 300 euro each at auction. There is a book which illustrates them in full colour by Dr Arnold Ryss, Charity Letters bearing advertisements for the benefit of orphans 1898 - 1901 (2004)

The distinctive feature of all Maria Feodorovna related items is the presence of an image of a Pelican feeding its young - traditionally, with its own blood. The Pelican also appears on the Theatre Tax stamps which are familiar to Russian revenue collectors. Some of those are common, others - notably the later high values - are scarce. I blogged about them on this site on 28 February 2012. Here is a set of the 1892 isue; the 25 and 50 kopeck top values on the right are rarely seen:

The Maria Feodorovna administration dated back to 1797 when the Emperor Paul entrusted his wife with control over the orphanages established by Catherine the Great. The administration expanded its work to include promotion of girls' education and provision of institutions for the blind and deaf. It was funded by charitable donations but also by the Theatre Tax, the profits of a factory producing playing cards and a tax on Playing Cards. 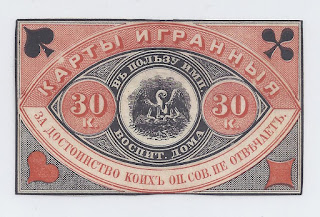 Above is an image of a Playing Card tax label for 30 kopecks. This label is very scarce but quite well known and it has been reproduced on the Internet - for example, by John McMahon at russianrevenuestamps.com. McMahon dates them to 1892 onwards.

Mentioned but not illustrated in John Barefoot's Russia Revenues catalogue are the orange and black banderoles used to seal packs of playing cards and illustrated here (I think for the first time on the Internet). The Barefoot catalogue is almost useless except for the section on tobacco and other banderoles which is based on the collection of the late Steve Alushin.

Finally, an item I cannot find listed or illustrated anywhere, a long banderole (illustrated in two images which are of different widths only because of cropping) which is a playing card tax strip for 30 kopecks applied to  bundles of playing card packs designed for distribution at clubs or meetings - this is spelt out in the text of the banderole on the pink background.The banderole has been extensively repaired but appears complete. At the very least, it is very rare and it may be unique. Click on the Images to Magnify

All these banderoles, like cigar and cigarette tax bands, are printed on the thinnest of cigarette paper (or "Bible paper") and the fine quality engraved printing was done by the Imperial State Printing Works in St Petersburg.