Correspondence in Hebrew and Yiddish 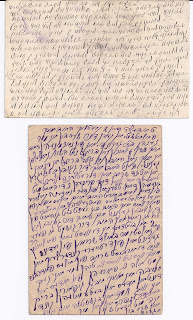 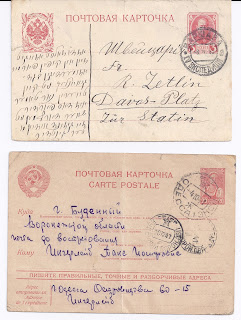 Anyone who goes through dealer boxes for Central and Eastern Europe at stamp exhibitions will soon come across postal stationery cards with the message written in Hebrew or (much more often) Yiddish. Such cards are quite easy to find for the period before 1914 from Austria-Hungary, Romania and Russia. In America, one university (Boston) has used such cards as historical evidence of Jewish commercial life before 1914 - go to www.bu.edu/judaicstudies/shtetl/index.htm for more information

After 1914 and until the 1930s, these cards become scarce for reasons connected to the changing character of Jewish life - secularization, urbanisation, the decline of the shtetl. This change is characterized in such books as Bernard Wasserstein's recent On the Eve which surveys Jewish life in Europe between the two World Wars. From the early 1930s through to 1945, as persecution extends across Europe, Hebrew and Yiddish correspondence becomes a rarity.

Above I show just a couple of cards.
The first dated  1913 is sent from Warsaw to Switzerland, the message spilling over onto the front of the Romanov card.
The second is most unusual, sent from Odessa on 4 October 1941 and only arriving in Budenny (Voronezh Oblast) on 20 December 1941. Romanian troops occupied Odessa on 16 October and, in just a few days, 22 - 24 October, some 25 000 to 34 000 of the city's remaining Jews were killed (according to the Wikipedia entry on the 1941 Odessa Massacre).