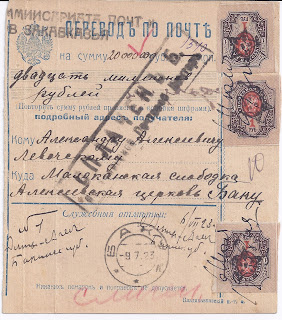 By 1917, Baku with its oilfields was the fourth largest city of Imperial Russia but away from Baku, the areas which became Azerbaijan were basically rural. But between 1917 and 1923 over forty post offices outside Baku operated at some time or another - Voikhansky gives a list (pages 207 - 208) in his 1976 book Postage Stamps of Azerbaijan (in Russian).

However, material you can find from these offices - loose stamps, covers and cards - probably adds up to less than ten percent of the total available. Material from Baku dominates overwhelmingly. Nonetheless, with such a modest number of offices it is tempting to try to collect examples from all of them. It will just take a very long time ...

Some offices clearly ran into problems. At Anneno (the German colony of Annendorf) they never seem to have had a proper canceller, making use of official seals instead. At Shemaka, the mechanism for changing the dates on the canceller stopped working so that the dates had to be entered by hand. And at Alty Agash, after making use of a boxed cachet (illustrated in the 1971 edition of Voikhansky's book, Plate XX) it seems they changed over to manuscript as shown above.

This item just came into my stock. The Money Transfer Form is overprinted at the top with a cachet of the Transcaucasian Commisariat of Posts and Telegraphs. The stamps are cancelled with the date (6 July 1923) in manuscript and at bottom right this date is repeated with the place name Alti Agash Baku Gub[errniya] also in manuscript. At bottom left, you can see that this is the first or fourth Money Transfer despatched from Alti Agash Baku Gub. The Transfer arrived in Baku the next day and was paid out on the 9th July.