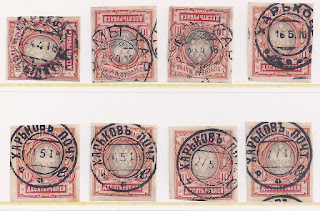 I have been doing some work on early use of 1917 Imperial Arms imperforate stamps looking at non-philatelic covers and cards. However, for the 10 rouble I have only loose stamps. So far, the only early uses I am able to record are in independent (but German Occupied) Ukraine. Above I show in the top row KHARKOV dated 4 4 18 SUMI KHARKOV  23 4 18 and 29 4 18 and also  KHARKOV 16 5 18. Then in the bottom row there are cancellations of KHARKOV POCHT for 21 5 18, 26 5 18, 27 5 18 and 17 7 18. But I think these stamps (and I have others similar) are probably cancelled to order even though they have no gum. The strikes are too similar.

It seems clear that not all district postal administrations received the 10 rouble. I have never seen copies from Armenia (with or without overprint) or from Georgia, but I have seen a couple of copies from BAKU. Use in  independent Ukraine, with and without overprint is quite common, especially in the Kharkiv and Odesa districts. But they can also be found from Poltava, Kyiv and (as great rarities) Podillia. They are not found for Katerynoslav.

Postscript 22 October 2012: I can now show an earlier date 1st March 1918 on a stamp used at LOKHVITSA POLTAV[a] G[uberniya]. The image below shows part of a Parcel Card fragment, signed Mikulski. Both the old 7 rouble and the 10 rouble imperforate were still available in Poltava at the end of 1918 and were re-issued with Poltava Trident overprints 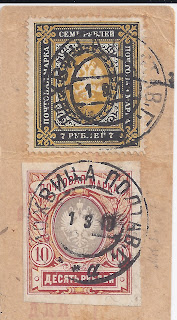