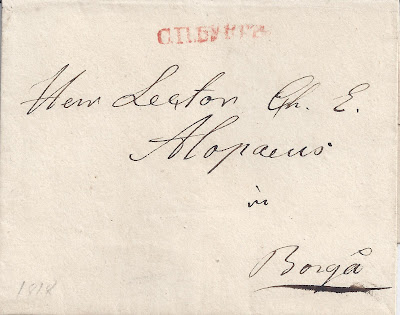 It is not unusual in Western Europe to see pre-adhesive international mail from St Petersburg before 1830 and with cancellations in Roman letters: SANCT PETERSBOURG or ST PETERSBOURG. But Cyrillic cancellations, used on internal mail, are rarely seen outside Russia.

The cancellation shown above only rates a "4" on Manfred Dobin's 1993 rarity scale (it runs from 1 to 10, with 10 the rarest). But this is only the second example I have seen in 20 years.

Maybe ten years ago, I bought the collection of the late George Henderson and with it the example of this cancellation of which Baillie and Peel say, "We know of only one example, on an entire ... with a message dated 16 11 1820, addressed to Narva." I sold this entire to a collector in England.

The example above is an outer letter sheet with nothing to indicate the date. The paper is unwatermarked. Someone has pencilled "1818" bottom left and it may be that the person who made the pencil note had access to the letter enclosed in this outer sheet, otherwise the date is a guess. Dobin gives 1815 - 1830 as the period of use for this cancellation and always in red.
Posted by trevor pateman at 09:56