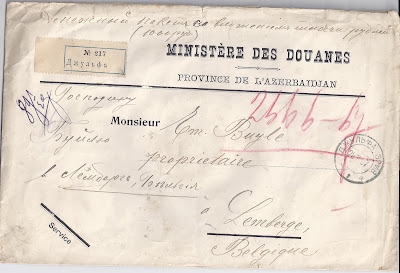 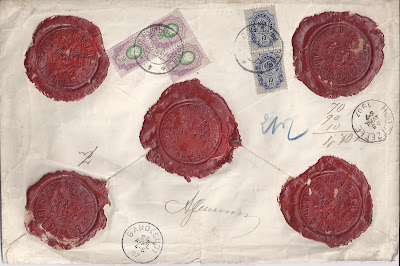 This attractive Money Letter puzzled me. It was sent from DZHULFA ERIV[an] 28 3 07 and arrived in Belgium at the end of April - there are two arrival cachets. The red wax seals were applied at the Dzhulfa Post and Telegraph Office.

But in Imperial Russia there was no "Province of Azerbaidjan" and I had never heard of a Russian "Ministry of Customs". Then I realised: this "Azerbaidjan" is across the border in Persia - in modern-day Iran there are still Provinces of East and West Azerbaijan (sometimes still spelt "Azerbaidjan"). It seems that this Persian - originated item was taken across the border at Dzhulfa so that it could be entered into the Russian mail stream - and, specifically, put aboard a train going north.

I am told that if this item had been put into the Persian system, it would have had to be sent down to Tabriz and even to Teheran and then put in a special bag for Europe. This would have delayed the item by two or three weeks - or more. So even though it was Persian Official mail, it was taken across the border to get faster delivery.

Labels: Armenia in the Russian period, Dzhulfa Erivan, Russian Consular Post in Tabriz, Russian mail at the border with Persia