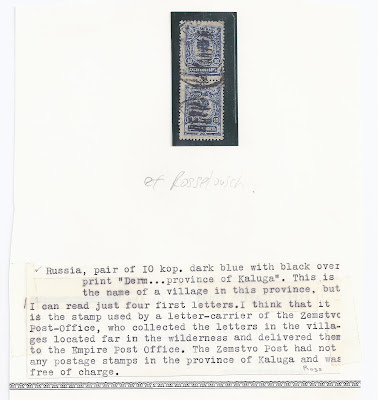 For someone who is supposed to be a Dealer, I spend far too much time puzzling over items like this one. A collector I know was having a clear out - I bought a box of stuff and this was just one item.

Rosselevich guesses the handstamp of a Zemstvo letter-carrier (you can read what he has written on the scan).

I guess differently: these are stamps from sometime after 1908. Not many Zemstvo letter-carriers about then. And unlikely that one would have put his mark neatly on the stamps rather than on the letter.

The vertical pair suggests to me that these stamps could have been on a Money Transfer Form or Parcel Card. So my guess is this: the handstamp has something to do with 1920 provisional revaluations of Imperial kopeck value stamps.

There can only be guesses really until someone can find this handstamp on a letter or formular. Anyone?

Added 31 October 2017: Joseph Geyfman in the USA translates the postmark as DERMINKA KALUGA and Google tells him that there was indeed a Derminka in Kaluga. But the status of teh handstamp is still to be clarified.
Posted by trevor pateman at 03:37